Me: Hi Mir, as I’m sure you are aware, we’ve been in pandemic lockdown for about two weeks here in New Mexico. How are you holding up?

Me: I’ve been pretty stressed out, worried about everyone and the neighborhood, more weepy than usual, but there are some bright spots.

Me: Well, I know you are pretty annoyed at parts of humanity. Care to elaborate?

Me: I hate fake medical news. Things like—put such-and-such up your nose or behind your ears to prevent the virus. I’ve always found putting things up noses pretty amusing—but no more.

Me: Any other pet peeves?

Me: Anyone who bad mouths millennials, or “the young” in general.

Me: Are you practicing good deeds in the tradition of Maimonides?

Me: Yes. On the level of ordinary kindness, I’m checking in with a person a day, even if I’d previously voted them off my island. Seems I am a foul weather friend.

Me: Yes, we’re cooking for St. Elizabeth’s Shelter—by the way, they could use more help here in Santa Fe. Just call them. You cook at home and drop off.

Me: I’m concerned—do you have enough turquoise jewelry to make it through to the end of the pandemic?

Me: Yes, thanks for asking.

Me: Thoughts on hoarding?

Me: I’ve given up toilet paper.

Me: Umm…too much information. Let’s move on to our last question for today. Why are you always wearing that dorky purple coat that got trashed out two years ago on the Japan trip and is now faded and worn?

Me: OK! Thanks for checking in.

Bio note: Miriam Sagan used to divide her time between Tune-Up and Counterculture cafes, but now she is home.

Night rising, stealing
away from winter.
The closed, blue
Atlantic Ocean and
I am silent.
It’s always different
awakening to the
razor sky, silent
sheep, soft earth,
the me of
bone and moon.

The author says–This poem came about because I was missing the colors of Iceland in this brown landscape. It was fun to do and hang in a tree in my neighborhood.

1. What is your personal/aesthetic relationship to the poetic line? That is, how do you understand it, use it, etc.?

I like to establish one thought or half a thought per line. When a line is not end-stopped, I sometimes like to leave an idea hanging so that I can create a surprise or mild surprise pay-off in the following line. This is true whether I am writing free verse or formal verse. I don’t try to force enjambments, though.

Writing reminds me of exercising: I put it off and find a bunch of other things to do, but when I apply myself to the page, as when I make myself go to Zumba or Pilates class, I eventually get into the zone. Getting a poem started, then using self-discipline to forge ahead is a big part of that idea of writing as physical endeavor. Once you get started and the words and ideas flow, it is as if the heart is pumping and the muscles working, and you feel alive. I am not an athlete, far from it, in but I think the comparison between writing and physical body is apt. Then after hitting the desk for an hour or two, you get that pleasant sense of exhaustion for time well spent.

I dislike being a poet when I am not being a poet, that is, when I do not have a work in progress.

Bio:
LYNN LEVIN’s most recent poetry collection, The Minor Virtues, is listed as one of Spring 2020’s best books by The Philadelphia Inquirer. Her previous collections include Miss Plastique, Fair Creatures of an Hour, and Imaginarium. She is the translator, from the Spanish, of Birds on the Kiswar Tree by Odi Gonzales and co-author of Poems for the Writing: Prompts for Poets. Her poems have appeared in Boulevard, Artful Dodge, on Garrison Keillor’s The Writer’s Almanac, and other places.

The first installation! To join us, drop me a note at msagan1035@aol.com

Cooped up by COVID-19, many people are taking to streets, sidewalks, trails, and paths for exercise, fresh air, and a sense of (socially distanced) community. To make being outside a little more interesting, the Poetry in Public Places Project (Poetry in Public Places Project) and the blog Miriam’s Well (www.miriamswell.wordpress.com) are throwing a Pop-Up Poetry Party!

Here is my first contribution, placed in a shrub bed by the street. 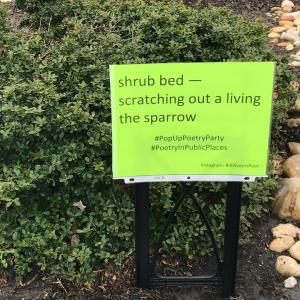 Now that the WHO has declared the coronavirus to be a worldwide epidemic, we can perhaps understand it better by juxtaposing it to something comparable in the past, not necessarily a recent one (like SARS in 2002-04 or ‘swine’ flu in 2009), but an epidemic farther back both similar and different in revealing ways. I would suggest comparison with what has been called the Great Influenza of 1918-19, precisely a century ago. A great deal of what we know (or, more precisely, think we know) about this catastrophe can be found online in an article on Wikipedia. Yes, I said Wikipedia and online, which many teachers and professors cavalierly dismiss out of hand. The fact is that using these resources, nearly everyone has instantaneous access to almost all of human knowledge. The present excellent article in Wikipedia is misleadingly entitled “Spanish flu,” a rubric that is being openly debated and will probably be soon replaced by something like “1918 influenza pandemic” (a debate that takes years to resolve in print media). In the space of about two years (some place the beginning in 1917, the end in 1920), a particularly virulent form of influenza spread throughout the world, killing at least 20 million people, more probably something like 50 million, and (a few say) possibly 100 million. More tellingly, it seems to have infected at least 500 million people out of an estimated world population of 1.8-1.9 billion. If we accept the reasonable estimate of 50 million dead, that would make a morbidity rate of around 27% (those sickened) and a mortality rate of 2.7% (those killed). These are interesting disparities, especially if one accepts a current view that the 1918-19 and present influenzas are variations on H1N1. But even if they’re not, such figures invite comparison. Although it’s early days yet with the corona virus (and no one knows how long this will go on), this morning I read on the very accurate John Hopkins website that about 285,000 people worldwide have been officially diagnosed with it thus far, 90,000 have recovered, and 12,000 have died. More specifically, in Massachusetts, of 410 diagnosed cases, one person has died, an 87-year-old man with many preexisting conditions.
What’s changed in the interim? A great deal, none of which is to be taken for granted. The idea of vaccination, for example, began with smallpox around 1800, took over a century to become a widespread practice, and smallpox was brought under worldwide control only in the 1970s. The virus causing the influenza of 1918 was identified only in the 1920s, an effective vaccine only in the 1930s. Vaccination against other diseases then became more and more common (e.g. polio in 1956, measles in 1963, chickenpox in the 1970s), but still arouses passionate opposition in some quarters. Penicillin was discovered around 1930, antibiotics from the 1940s onward, antivirals since the 1970s. We all too easily take for granted these and other great advances in science, medicine, and public health and policy like sanitation, clean water, and sterilization, which cumulatively led from an average lifespan in the US of around 47/48 a hundred years ago to around 78/79 today. We are also more recently the beneficiaries of inventions like computers and the internet, glorious inventions for the instantaneous dissemination of knowledge and truth (but also, as we have ruefully come to realize, fake news, previously known as lies, and a curiously widespread indifference to easily determinable facts). And what does this (hopefully) teach us? Change is inevitable, but progress is an option and never to be taken for granted. And even when there is progress, it’s usually three steps forward, two steps back. 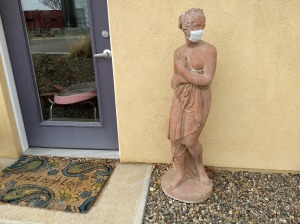 Seen by Richard Feldman in the hood.

Bill Waters the of Poetry in Public Places Project says:

Isolation, to a greater or lesser extent, has suddenly become the new normal, and open spaces — parks, trails, paths, sidewalks — are surging in popularity as places where people can get out of the house for a while to stretch their legs, alone or with a friend or two.

At this time of uncertainty and worry, poetry in public places can be more than something to enrich the hustle-bustle of everyday life. It can serve as a point of connection to something bigger than even a pandemic: the universal human experience, of which illness is only one part.

Bill Waters and Miriam Sagan of the blog Miriam’s Well (http://miriaswell.wrdpresscom) invite you to participate in a far flung poetry pop-up project.

The aim: Pick a site in any location you can access. Write a poem about or suited to that place, your feelings and observations, etc. Please do not limit yourself to current news or virus concerns—be expansive.

Installation: This is essentially ephemeral or guerrilla art as we are’t installing in a group (maybe later!) with permission from something like a sculpture garden. Figure out how you want to place the poem in the site—tied to a tree, hidden in a box, written on earth or sand, attached to yarn bombing…the options are endless.

Proviso: Be respectful of the site—don’t litter or obstruct anything.

Documentation: Take some photos, type the poem up, and send to us. We will create an on-line way of showcasing your work.

Maintenance: Some pieces will be documented and come down immediately. Some work is meant to weather away. Some is meant to be pocketed by a passer-by. Figure out how long you want to keep the poem “up”—are you re-writing it in the sand every day? Or not.

We’d also love to hear from you if you just want to share your preliminary idea.