We went to Jimi Hendrix’s grave in the pouring rain, en route to the Seattle airport. I had been plagued by the problem of what to leave. My first thought, of course, being a baby boomer, was a bra. I don’t know where this comes from, but underwear seems the appropriate gift to the revered dead. However, in the cold light of day this didn’t seem like such a great idea. And good thing too, because there is a sign at the grave asking visitors to keep it tidy and free of trash!
Nicely done winter floral arrangements decorated the memorial in an organized fashion. Someone HAD left some beer cans, though–neatly woven in with a bouquet of berries. I whipped out my gift–a card of the Queen of Hearts I’d acquired on a Valentine’s Day in Las Vegas.
It expressed what I wanted to.
A bunch of kids came by, snapped pics on their cell phones, stood a moment reverentially, and zipped off.
We left too, off into a different life. 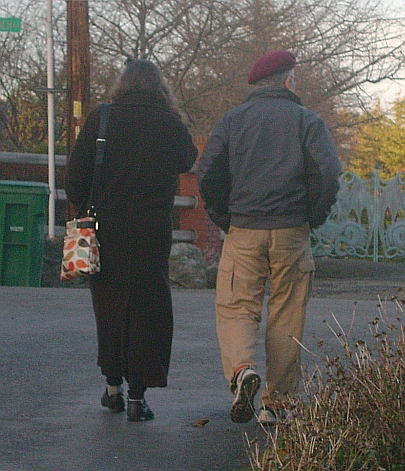 (Photo of me and Rich by Miriam Bobkoff).

1 thought on “What Should I Leave on Jimi Hendrix’s Grave?”