I’m always so happy to publish something from intrepid traveler, writer, and photographer Ursula Moeller. Here is more from her trip down the Green River.

Beaver tracks with dragging tail, human footprints alongside for scale.

Our luxury facilities. I could almost stand up in this tent and the roof was mesh so we could watch the stars. With no ambient light the sky was deepest black with what seemed like an  infinite number of stars.
The Milky Way was so pronounced I felt I could walk on it. 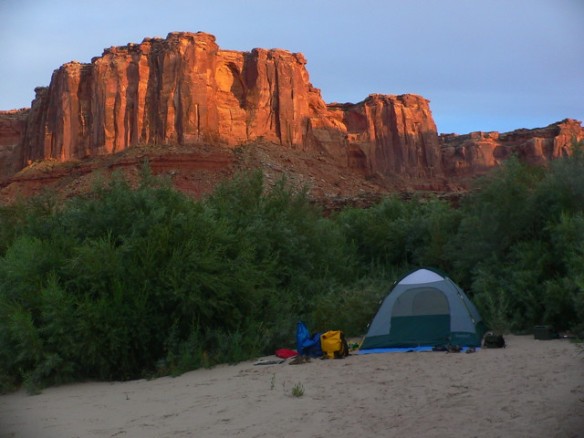 It was cold and rainy our last day. The other days had been very hot and sunny. 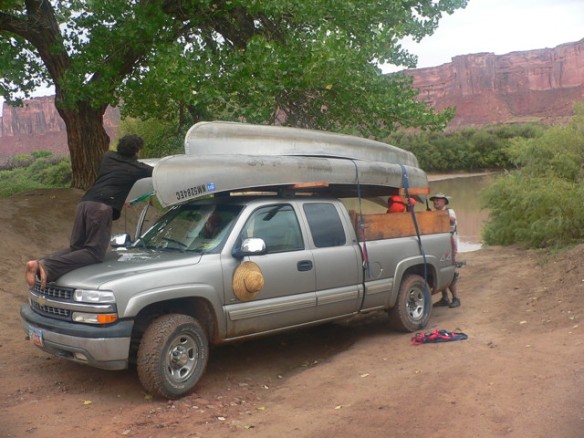 Our system for carrying three canoes.
Two were our old ones from Syracuse NY which we brought out here to the southwest.

> My husband and and I took a ten day trip to Utah, canoeing and tenting and examining rock art on the Green River in Utah. We were joined by two archeologists and a wonderful twenty year old boy who paddled alone in his canoe and carried extra gear including the state-mandated portable toilet. 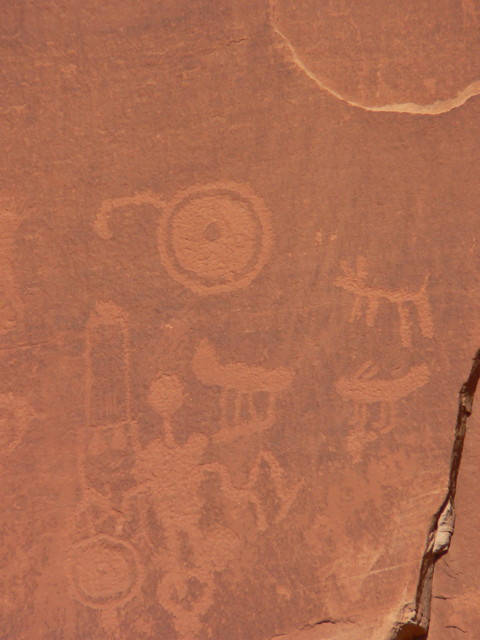 > We traveled far from all civilization for five days. We had to do lots of paddling because this river (which was brown rather than green) is very slow and the water level was low.
> It is always as moving experience to be immersed in nature, surrounded by red cliffs, moving water and the mostly cobalt skies above, with no signs of mankind – except for rock art that’s hundreds of years old. Some petroglyphs were even from BC times. How mesmerizing to see them and wonder who pecked those images and why? The red rock formations lined the river the whole way and we had one eureka moment after the other, as you can see. We enjoyed differing vistas around each bend with changing light throughout the day. It was an endless gift of which we never tired.

I have really been enjoying a new blog devoted to answering this question http://theiwritebecauseproject.wordpress.com/

My answers are up today–check it out!

Why do I write?
I have several answers:
1. The Mythic. I was born to write, I started writing as a child, I write to express, to connect, and to understand the world. To explore the beauty of language. To extend the boundaries of the self.
2. The Slacker. I like a lifestyle that lets me get up late, hang around the house, read, stare into space, and get to say “I’m working.”

I have found that my poetic lines have been tightening over the years. Say twenty years ago, my poetic lines were flowing, sprawling creatures, varying in length and sometimes surging towards the right margin like great-grandchildren of Leaves of Grass. But in the past decade, my lines have become shorter, leaner, more proscribed. Sometimes I try to let them run more freely, but they fight the impulse and insist on snapping off and establishing a series of short lines. I suspect this change has come about because my life has shifted from the Dionysian joys of youth to the more controlled, Apollonian forms of middle age. Also, there may be an influence from my Zen practice. It is probably no coincidence that I started actively participating in Zen meditation about a decade ago.

I am only consciously aware of a connection when I read my work to an audience. Then, my body accompanies the words with jabs, gestures, footwork, changes in tone and volume. However, unconsciously, I am sure there is all sorts of interplay between my writing and my body – muscle tensions evoked by a particularly emotional passage, secret heart rate elevations, an unnoticed tapping of feet or hands.

Of course, there is also the rather prosaic (and negative) affect on my body caused by the significant amounts of caffeine (and at one time nicotine as well) that I consume when I write.

Finally, one always hopes that one’s strongest work has a physical, sympathetic affect on one’s readers (besides nausea, that is!).

Not really. Oh, I suppose we all wish there were a bigger audience for poetry. But what a wondrous feeling when the lines hit the page and you know it’s running fine, like an alto sax player laying down an architecturally perfect solo in a bebop quintet.

My daughter reads
a book on alchemy,
tells me of the
valley where
the stars fade.
“Wonderful image,”
I say. “I’ll steal that
for my next poem.”
“Can’t,” she replies.
“T.S. Elliot already used it.”

Those modernists
took everything,
leaving us with
nothing to say.

However,
after my daughter
tells me this story,
I dream
of the valley
where the stars fade.
I am standing
with a former lover
who forgives my
trespasses,
climbs into
her white Cadillac,
and becomes an angel.

As I awaken,
I remember
when that angel
poet, John Knoll,
came to me just
before we were
to do a reading
and handed me
a pint of ginger
brandy distilled
in the fire of an
alchemist’s retort.
We downed it
in six short jabs,
like boxers sparing
before a bout.

Man, I read
as if God’s fire
possessed my soul
that night.
***
John Nizalowski – Biography

Born and raised in upstate New York, John Nizalowski received degrees in English from Binghamton University and the University of Delaware. He has taught at Virginia Tech and for the College of Santa Fe program at the Penitentiary of New Mexico, as well as writing for various journalistic publications, including The Santa Fe New Mexican and Telluride Magazine. His literary and scholarly works have appeared widely, most notably in Puerto del Sol, Blue Mesa Review, Weber Studies, Blueline, Slab, Chiron Review, New Mexico Poetry Review, ISLE, and Under the Sun. He is also the author of two books – Hooking the Sun (Farolito Press, 2003) and The Last Matinée (Turkey Buzzard Press, 2011). Currently he teaches writing and mythology at Colorado Mesa University in Grand Junction, Colorado and is working on a biography of Southwestern author Frank Waters.

I’ve been having a pleasant domestic time of late. Cooking brisket for Rosh Hashana–a two day production. Knitting two scarves. A bit of ephemeral embroidery. Watering and dead heading the garden. Admiring the roses (who knew that the miniature bushes at $1.99 from Trader Joe’s would become gorgeous white green blooms the size of big brussel sprouts).
But I feel guilty, because I was raised to read. And read. My mother–an early feminist and decided intellectual–wasn’t big on the domestic arts. I never learned to cook or sew at her knee. I learned that a woman’s place is on the couch, with an enormous Russian or French novel. No surprise that my mother and I are both English teachers.
But sometimes I don’t want to read–or even write. I’ve been writing short fiction again–more of a whim than my avocation. Dark worrisome tiny stories. One so controversial that an editor accepted it and then had to reject it–the tech staff refused to print it. I was both surprised and not. Writing, even reading, can be dangerous.
As summer turns deeper into autumn and the big sunflowers from Hopi loom under the portal and black crickets scurry into shade I want something that is neither rest nor adventure. That isn’t reading. But roasting or stitching.

In these lethargic times
Without gaiety, without remorse
The only laugh that is logical
Comes from the skulls of the dead.

I had never seen the powerful work of this abstract expressionist until I was in the art museum in Montreal. 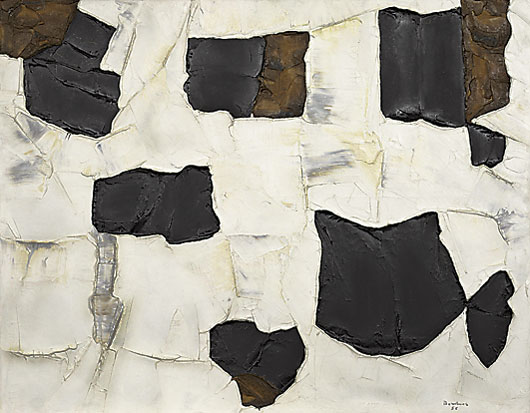 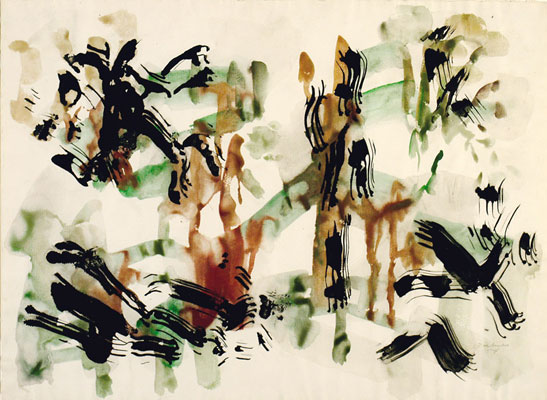 1.What is you personal/aesthetic relationship to the poetic line? How do you understand it,use it.

I try to follow the William Carlos Williams dictum of
“utterance”when writing Haiku or tanka. Williams defined utterance as the length or duration of the human breath or exhalation.The ancients termed the god’s sacred breath as pneuma. A breath that could infuse humankind with prophecy, wisdom and confer blessings. Short poetry,especially haiku, seems to have this magical incantatory quality.
My haiku are normally structured in the 3-5-3 syllabic line count (tanka 3-5-3-5-5). This strict syllable number is an ideal that I can’t always achieve, however, the shorter the better is always my preference.
I have always liked terse pithy statements,such as the
aphorism, apothegm, maxim and bon mot etc. Haiku is an extension of this brevity of speech with the additional extra of giving the reader the ability to read between the lines and intuit new
information from what isn’t said. Good haiku invest negative space with meaning.

2. Do you find a relationship between words and writing and the human body writing and your body?

Focused and sharpened attention is the main side benefit I derive from writing. A haiku mindset demands acuity of all the senses to attune the entire body to the extraordinary that can be found in mundane day to day occurrences. Writing with a kinesthetic mind and body awareness reveal relationships, linkages and interconnections that are not normally apparent.

I regret that after an infatuation with poetry as a student I banked the fires in early and middle age and waited much too long to rediscover and rekindle this passion.

Terry Ingram is a retired advertising writer-producer-director. Writing Haiku, Senryu, Haibun and Tanka since 2000. Born and raised in southern Illinois. Attended the University of Illinois in Champaign-Urbana. Now resides in Texas – USA