The WordPress.com stats helper monkeys prepared a 2012 annual report for this blog.

19,000 people fit into the new Barclays Center to see Jay-Z perform. This blog was viewed about 65,000 times in 2012. If it were a concert at the Barclays Center, it would take about 3 sold-out performances for that many people to see it.

Even though I am a classroom teacher (and the daughter of one, and the mother of one) I had decided not to write about the Connecticut school shootings. What do I know about suffering, God, evil, loss, mental illness, or gun control that is more than the average person? Nothing.
But I do know a lot about the personal essay form, so I was drawn in to Anarchist Soccer Mom’s blog piece in which she compares one of her children to the shooter. First the entry went viral. Then it was attacked. Why?
I am not Anarchist Soccer Mom’s editor or member of a writing group or teacher, but if I were, I’d take a look. The strongest point in the essay is that she attempts to speak for someone else–in fact for a group of people. And she also speaks for the dead–Adam Lanza’s murdered mother whose thoughts we will never know.
This is a fictional technique. Memoir itself does not have a separate set of rules as another form, such as the haiku, might have. It uses fictional technique to create believable prose. And most literary memoir aims more to be believable than “true.”
This kind of statement upsets my classes. Folks want to tell the truth. But we aren’t journalists. Truth in memoir depends upon that notoriously fickle source–memory. Can you get every member of your family to agree on how an event transpired? I certainly can’t.
So then other writers attack Anarchist Soccer Mom. One “outs” her by reading the rest of her blog–an idea I find very silly, since the blog is there for all to see in any case. And then everyone starts telling her what she can and cannot write, what she can say about her children, her feelings, etc. I find this policing of art odd and oddly American. Personal writing is not done by committee and it does not need to be “fair.”
I was once very amused to read an on-line book club discussion of my memoir “Searching for a Mustard Seed.” In it, someone asked with great irritation–“Why is Sagan ALLOWED to write about this.” As the topic was the death of my husband Robert and young widowhood I certainly hadn’t stolen the material. I suspect the reader’s question had to do with the fact that I wasn’t famous or a celebrity.
So granted, Anarchist Soccer Mom is allowed to write about whatever she likes. However, her piece created some reservations in me too. I think it has to do with how she located herself, her persona. I didn’t totally believe it. That is, it all may be perfectly true but the speaker wasn’t fully developed, the material not digested. Granted, this is a blog, off the cuff. And the writer was in dangerous water. So hats off to her for doing her best.
But I’ll just say what all writing teachers say–slow it down, create a curve, add what Natalie Goldberg calls original detail ( do I believe those knives in the Tupperware?), and give it some meaning beyond the stated aims of the speaker. That is, make it art. This is what I tell myself. And as I may never know what is objectively true, I’ll go for what I hope touches the reader’s heart.

What A Long Strange Trip…

Well, I have to say I don’t know when I’ve enjoyed myself more. But this trip has also been a bit strange. Due to some personal vagaries, a trip to elsewhere got cancelled. Rich basically had 36 hours to put this one together. He says he “took a trip off the shelf” and customized it. It involved moving around tickets on Southwest and staying on fairly known territory in what Rich characterized as the “region.” (To me, seeming a bit further afield).
We both like Las Vegas. We had family there when we started visiting, and soon enjoyed it for itself. So, a dirt cheap rate at the Flamingo, 24 hour buffet marathon, and tickets to Ka. Then into the Mohave–a big desolate place we’re still getting to know. Funky hot spring (too funky really) and exploring the Mohave National Preserve–beautiful quiet walk through Joshua Tree forest, a classic mission style railway station. And a visit to my favorite date ranch (I can’t believe I have such a thing, let alone that I returned).
And then a complete shift in topography–Zion in Utah. The queen of red rock canyons. Lovely rooms, lodge, thank you Teddy Roosevelt! River walking and monoliths. Sitting in a rocking chair admiring a cliff. Snow in the morning and mist. A Chinese scroll vertical. Back through the Valley of Fire with its panoramic bursts of vermilion and a petroglyph walk in the softest of red sand.
Back to Vegas and cut rate at the Rio, which has enormous pleasant rooms. Nice dinner in Hong Kong dim sum parlor (clay pot eggplant and tofu stuffed with shrimp) and home on Tuesday. But we were just discussing–who do we know who would like all three places on this trip (besides us)?
1. Vegas
2. Mohave hot spring
3. Zion National Park

We have friends and family who like Vegas, who like hot springs, who like red rock…but we couldn’t come up with anyone who likes all three.
So tell me–which parts of this trip would you do?

The lady who sold me these glitzy buttons said she once tried to leave Las Vegas.

She moved to Texas, and then immediately had to move back. 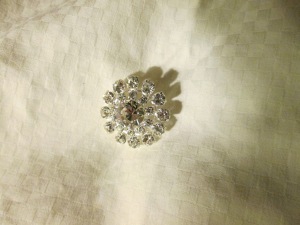 I asked her if she thought the buttons would be upset to leave Las Vegas. 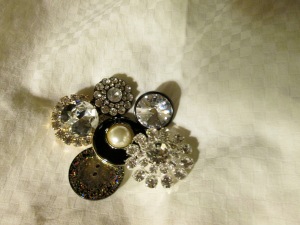 They seemed a little scared. 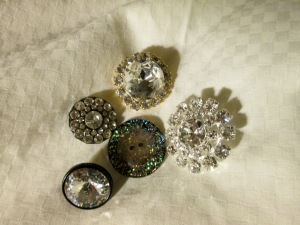 But I told them not to worry.

Wherever we go, they’ll shine. 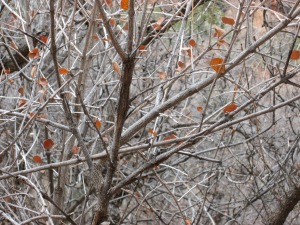 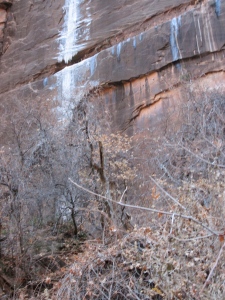