I’ve been writing fiction, after a long hiatus. And really enjoying it. But I have more first lines than I can use. Hence my piece in the fun e-zine Cease, Cows.
Here are a few samples:

It was not my problem, and yet I continued to medicate it.

Dusk came on like a panhandler in an empty parking lot.

He cared a lot more about plastic containers than he did me.

My ultra creative daughter Isabel is building herself an official Tiny House this summer. The Slavic witch Baba Yaga isn’t the only one with a mobile dwelling! Help be part of the team that builds the foundation–a trailer bed in this case–by contributing at http://igg.me/p/443880/x/3699690
$5.00 gets you in as part of the team and higher contributions get you a B & B stay in the house!

We waited to see what would happen
next, but there was no kiss, just an unkiss;

we remained bifurcated, speaking only
with tongues not in them, your words

across the space between us understandable,
the opposite of Mandarin and Cantonese.

If you wrote me a letter, I couldn’t read it,
but speak to me, and it’s all quite clear.

Sometimes a poem is like that: clear in
the air, full of knots on the page, or

the reverse, pictographs anyone can
apprehend, but otherwise filled with

obstructions. The man who invented
Esperanto was an ophthalmologist,

meaning he studied the science of eyes,
and he saw the barrier which wasn’t

about sound but apprehension. Roll
your pig’s tail tongue around my little

finger, word-slop our fodder, thrash
with me in the gutter of utterance.

You can tell a pig from the friends
he grunts with. Toss some pigs before

pearls, some cats to gold coins, let
the cows hear our music. Tell me

you see my eyes in Pig Latin, tell me
you love me in two ways or in some

unpronounceable way, unkiss me
so hard, I am kissed anyway. 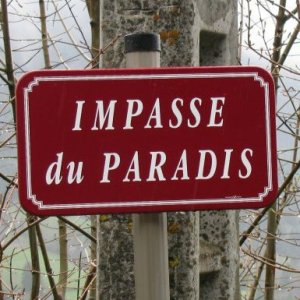 Thanks to Libby Hall, who submitted this and says: “Taken by my nephew, Mikel D.C. Moss in France. Road sign – apparently there is a town called Paradis but it is very hard to get to. Such is the case with Paradise.”

In an interview with this blog some time ago, poet Jean Valentine wrote that she was debating two versions of a line:

I’m always, my young fathers, out in the air,/
loving you.

or (one line without a break): I’m always, my young fathers, out in the air. Loving you.

Which do you prefer? 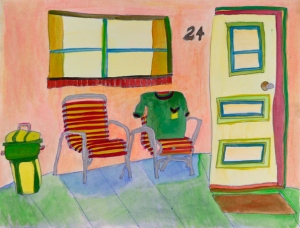 This is a bad book. It violates genre by unleashing an “epidemic” on humankind–that is, the hero totally fails in his mission. That said, I read every word, but my excuse is that I was stranded in LAX.
So–three good things about the book
1. Nice descriptions of art
2. Appreciation of Dante
3. Fast paced
Negative things
1. The plot makes almost no sense
2.The ending is a ridiculous futuristic impossibility
3. The protagonist gets less sympathetic with each book
Oh, and people have implausible diseases, implausible crushes, and implausible identity flipflops.
Don’t bother.

Yesterday morning I visited one of my favorite blogs (The Top Ten of Anything and Everything) and was surprised to find a post on shoe tossing. You really need to check out this blog. He has some of the most weird, crazy, yummy and downright beautiful photos on there. You’ll love it. Back to the shoe tossing. We have our own local shoe tree and I’d planned to visit to get some pictures. Seeing these top ten photos inspired me to keep those plans. Our shoe tree is located at the crossroads of Devil’s Hollow Road and Shoetree-McFelea Lane. Now with a name like Devil’s Hollow you’d expect to see some strange things and I have seen a few in the past, especially around Halloween. But I digress. I’ve heard a couple of different stories as to how the tradition of tossing shoes into that tree started…

I have a story about my morning that basically explains my entire life.I go to the University of Minnesota and I will be graduating on Sunday. Two days from now.

We have this tradition on campus where when you graduate, you get to throw a pair of shoes on to the shoe tree. The omen is that if you miss you fail your finals.

So my best friend and I met freshman year and decided to throw our shoes together. We’ve been planing this for about a month. My boyfriend came to take pictures. We were wearing our cap and gowns. It was going to be CUTE.

So it’s really cloudy out and the forecast keeps threatening rain but we decide to risk it and go take pictures anyway.

Along America’s “Loneliest Highway” (Route 50 across Nevada) a shoe tree was vandalized. But a new one sprung up to take its place. 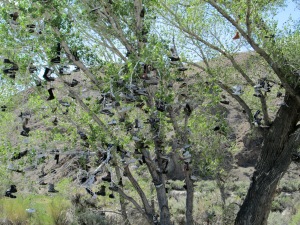 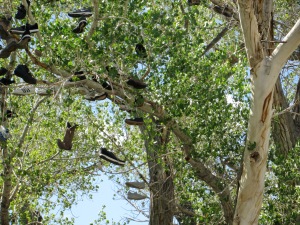 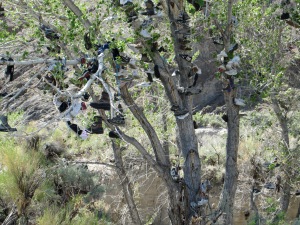 ROADSIDE AMERICA has this to say:
Shoe Trees may be the greatest embodiment of the American Spirit you can find on the highway (free of admission charge, anyway). While cultural anthropologists trumpet the aggregated populist statement of the gum wall or the gob rock, we believe Shoe Trees soar to greater heights.

A shoe tree starts with one dreamer, tossing his or her footwear-of-old high into the sky, to catch on an out-of-reach branch. It usually end there, unseen and neglected by others. But on rare occasions, that first pair of shoes triggers a shoe tossing cascade.