I was recently with a group of Baby Boomers who were intent on bad mouthing the current young–sometimes known as Millennials. There were the usual complaints against texting, tats, and unprofessionally dressed slackers. And this from those who hardly spent their twenties in business suits.
I find this both sad and surprising. I love this generation, which includes my only child, my seven nieces and nephews, the children of my friends, and the majority of my students. I find them cooperative, honest, funny, and caring. And considering the problems of the world they inherit, this is saying a lot.
Mostly, I’m amazed they like me. They hold the door for me, comment on my cute socks, suggest movies and books, and wonder if I need more magnesium in my diet. Would Baby Boomers rather be scorned than loved? That is, do we prefer generational warfare just because it is familiar?
However, we Boomers are becoming increasingly dependent on the young as we age. So why not see their virtues–including the virtue of youth itself?

my dreams have begun
to win arguments

sometimes at night I climb onto rooftops
and watch myself sleep
between the rows of corn
that have taken my name
and not apologized.

we have bargained
light for a deeper place
where wings turn
into the good taste of earth.

my 24 year old daughter
who spent her childhood
squeezing through a cat door
and ruining a window screen
letting boys in and out
immediately climbs to the sill
unlocks the pane, and departs.

I, on the other hand, larger, more frightened
sit, one leg in the house, one in the yard
squeeze my hiking boot
through gingerly
land on a cellar door.

the administrator of the guest house
is displeased with us
gives us a strict Icelandic lesson
in locking and unlocking
blames the weather–of course–
for the swollen jamb
and us for our incompetence
but with grudging admiration
for our initiative.

as for me, I’ve been re-born
onto a windy street by a windy bay
where everything seems content
to knock me over
and the sun
sits on the horizon
patient and intent
as a midwife.

Haibun is a Japanese form–prose interspersed with haiku. Think Basho’s travel journals, such as “Narrow Road to the Deep North.” An interesting approach to contemporary visual haibun can be found at http://www.haikudeck.com/p/f3p1ZwpGo6/timeline-how-to-create-visual-haibun# 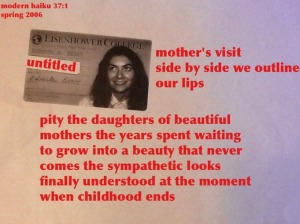 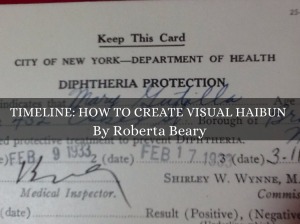 Roni Horn created an amazing installation in Iceland. Wikipedia says “In 2007 she undertook Artangel’s first international commission, creating Vatnasafn / Library of Water, a long-term installation in the town of Stykkisholmur, Iceland. The installation is made up of water collected from Icelandic glaciers.[11] “Weather,” observes Roni Horn, “is the key paradox of our time. Weather that is nice is often weather that is wrong. The nice is occurring in the immediate and individual, and the wrong is occurring systemwide.”[12] The “Library of Water” is housed in a former library building in the little town of Stykkisholmur on the west coast of Iceland. Roni Horn noticed the building during a trip through Iceland in the 1990s. It is located at the high point of the town, overlooking the harbour and the sea. The architecture is influenced by that of lighthouses. It was conceived by Horn in 2004 as a sculpture installation and a community center, offering both a space for quiet reflection and a room for meetings and gatherings.” 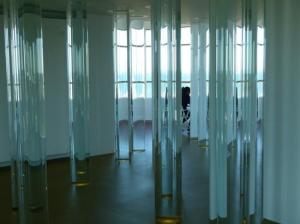 I haven’t seen it live, but would love to.

as steam rises through the grates
of enormous cities

mist from the lake
of the submerged dragon

to offer this begging bowl
of cloud
and rain 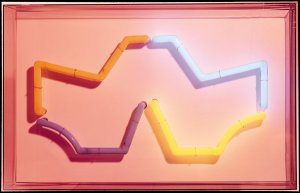 Some critics expressed discomfort that Chryssa’s artwork, with its layers of atomized text, could not easily be interpreted. But that, she replied, was precisely the point.
As she told The Herald Tribune in 1968, “I have always felt that when things are spelled out they mean less, and when fragmented they mean more.” 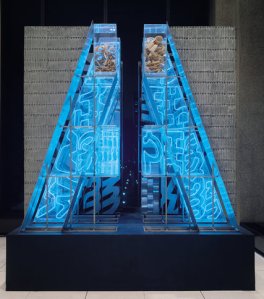 My friend Kathleen Lee writes prose–but here is her translation of a Jamie Sabines poem. This was done as a project in an SFCC Spanish class. You can find more by looking at Phil Levine’s translation of a book of Sabines’ poems – Tarumba – in a bilingual edition published by Sarabande.

The first rain of the year drenches the streets,
unfurls the air,
freshens my blood.
I feel such ease and melancholy, Tarumba,
watching the rain fall from who knows where,
over so many and so much.
Help me to see without mourning,
help me to rain over my own heart
so that it grows like chayote
or yerbabuena.
I love so much the youthful light
of this morning
and its tender sultry air.
Help me, Tarumba, to not die,
don’t let the wind blow away my leaves
or drag me from this bright earth.

I guess you could say I’m a fan of the poetic line. It’s a tool, like a hammer, and it can be used carefully, even delicately or brutally. I’m often suspicious of prose poems (though I’ve written them, so I’m a hypocrite) that don’t take advantage of such an important tool. The line is as much a part of the poem as the rhythm, sound and sense. I tend to use enjambment a lot, which doesn’t help a listener much, but can be a guide for the reader. I’m also a fan of the medial caesura, mostly as a tension-builder/breaker.

How I use them… there are probably multiple ways, but one rule I have for myself is to try to avoid ending lines with throw-away words. You don’t (at least I don’t) have a lot of space to work with in a poem, so make every word do as much work as possible. If you’re going to call special attention to a word by putting it at the beginning or end of a line, then make sure that word deserves the attention. Sometimes there are tradeoffs, judgments to make. I’m also a fan of balance in poems, so I try to keep lines reasonably equal in meter and length. I like that decisions like that can be so important to us.

I can’t say I really do. I’m mostly projecting outside myself, rather than inside when I’m writing. Physically I need to be comfortable and in a quiet space while writing, though I’ve done some writing on cramped airplanes (I travel a lot for my job), though not often. I prefer the tactile feel of typing a poem on a computer to writing it out by hand, but that’s probably more out of habit (and the ease of editing) than anything else.

I have a fairly comfortable relationship with my body. It does what I need it to. Now that I think about it, I feel pretty much the same way about my poems. I’m happy with them, but they can always use a little improving. As the years go on I know that eventually the body won’t hold up, but I hope the poems do.

I guess I don’t like that I can’t (or don’t feel comfortable) talking about being a poet with my non-poet friends and colleagues. My day job isn’t at a university, so poetry isn’t something that comes up a lot in conversation. If I mentioned at a lunch meeting that I was into sword swallowing or bug eating, I still think I’d get weirder looks for telling people I did a poetry reading the night before. Even most people I know who were former college English majors haven’t read any poetry since it was required of them in British Lit 2.

While I wish poetry received more respect in our society, I’m very happy with what poetry has done for me. Poetry forces introspection and focus at a level most people don’t bother with. Poetry requires an awareness of things, a study of relationships, an ability to translate situations into precision. I don’t think I’d be doing those things if poetry hadn’t created the habit in me.

Two-headed Calf at the Farm Show

We came for sights and smells,
distractions of giant beets
and blue-ribbon goats,
but at the taxidermy tent we find
a body mounted, badly stitched and
held into a suckling pose
by wires hidden in the neck,
a calf that may or may not
have been more than we expected,
and who expects these things?
Not the calf as it entered the world
watching itself watching itself
slide out onto the sharp padding
of straw, strong hands pulling
at its legs. One heart, one spine
branching like a river
with two mouths to the sea
and for a brief moment
they both gasp, breath
struggling down a pair
of clotted throats, a god’s
joke that let the gentle eyes
open long enough to see
each other’s own lovely brown eyes
slowly close, the one heart too shocked
to bring legs up for balance
and finally those farmers hands let go.
So now under a sun hot tent
we reach out to touch it,
holding hands but looking away,
thinking of the big coffee eyes
the moment one person knows before the other
that the fight for air is over
when one heart’s not enough
for both of us.
BIO:

Grant Clauser’s latest book new book, Necessary Myths was the winner of the 2013 Dogfish Head Poetry Prize from Broadkill River Press (www.thebroadkillriverpress.com) He’s also the author of The Trouble with Rivers and has poems in or forthcoming in The American Poetry Review, The Literary Review, Painted Bride Quarterly, Cortland Review, Seattle Review, Tipton Review and others. In 2010 he was Montgomery County Poet Laureate. By day he writes about electronics and daydreams about fly fishing. He teaches poetry writing at conferences and Musehouse and runs the blog http://www.unIambic.com.