Check out the photos in the post below. Here was the process.
1. I kept a one line a day journal for a year. The process started on Valentine’s Day, 2013.
2. Went back and picked one entry per month that seemed representative.
3. Bought a windbreaker and had a local commercial embroidery business put the text on it. I had to fight with them a little to get one entry on the sleeve. I actually wanted the text scattered more, but this was an experiment.

sugar ants in the cat food

snipping mint in the rain

***
They sort of read like one-line haiku here. I still wish some were embroidered upsidedown.
Any suggestions for if I do this again?

Enjoy! I will be posting full text and explanation next. 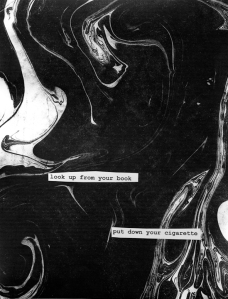 I have just refreshed the posts with final poems from the spring poetry class at SFCC. Above is a preview of a project I’m very excited about. I have written a short poem or stanza about the exact site of each post, and how they have been transformed in the campus landscape.
The gorgeous spilled ink designs–Japanese suminagashi–are from my artistic collaborator Isabel Winson-Sagan.

These will be posted over the summer. Expect an update!

1. I am not a perfectionist. I’d rather hide a mistake than go back and unravel it.

2. I am not a snob. Although I’ve spent time and money buying hand spun wool from the person who also dyed it I’m equally happy with wildly colored synthetics.

3. I can count. Iambics. Haiku. Recently I got pulled into playing the marimbas at a festive event–the band leader just grabbed me. It was so easy, despite my lack of musical ability, that someone asked me how long I’d been doing it professionally.
Just counting.
Like knitting.

What I’ve learned from embroidery.

1. The back will never look like the front, and that is just fine.

3. No force on earth can stop me from licking the thread. 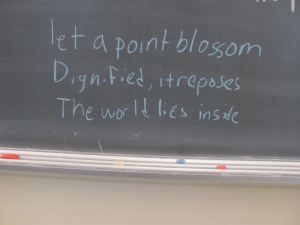 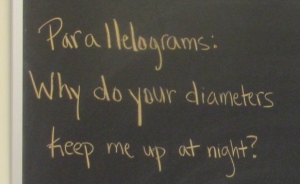 Linda Wiener comments: We studied Euclidean geometry the first half of the semester and then studied Lobachevski’s non-Euclidean geometry in which parallel lines approach each other infinitely, but never meet. These Haiku are end of the year reflections on our class and our studies. 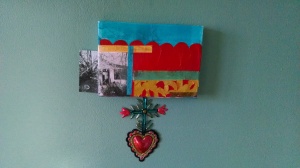 What I Am Reading

Just finished–AN OFFICER AND A SPY by Richard Harris. If I didn’t understand the Dreyfus Affair I now do, and the force of French anti-Semitism. But this isn’t non-fiction, rather a historical novel that reads like pure suspense. Complete with mistresses, meals, and Mahler conducting Wagnerian opera.

THE SUBVERSIVE STITCH: Embroidery and the Making of the Feminine–a fascinating book on the intersecting histories of European embroidery and women–although it predates the current post-feminist movements and seems unaware of other traditions.

THE NAME OF THE WIND by Patrick Rothfus given to me by a favorite family member, the best swords and sorcery I’ve ever read, an antidote to too much Robert Jordan.

About to start–IN PARADISE by Peter Matthiessen. I have mixed, very mixed, feelings about the author and as a rule won’t read a novel set in Auschwitz, but this came highly recommended.

What are you reading?

Pick a card, any card. I pull one of the Brian Eno cards from the deck OBLIQUE STRATEGIES for creative inspiration. It reads: DISCARD AN AXIOM.
Great idea, kind of a mental housecleaning. I wonder, what axioms do I buy into about writing? How about: WRITE WHAT YOU KNOW.
The truth is, I’m sick of writing about what I know, even though this includes terrific things like love and New Mexico. I’m totally bored. I already know these things. So, how shall I write about what I don’t know?
Recently, I had an elaborate dream that was almost a complete story. I jotted down as much as I could. It is about a young woman raised in Iceland by two women. The story opens at the end of the Second World War. I know about relationships, mothering, and a spec about Iceland. But my vision took my by surprise, and is more unknown than known.

Early on a May morning, 1945, Monika and Unna were awakened in their bed. A cart rattled, a cat knocked over a bottle, a radio turned too high, firecrackers in a tin can, someone banging a pot with a spoon. The war was over.
The bed was ample, awash in quilts and coverlets, feather pillows, embroidered pillowcases.
“Your belly button has turned inside out,” Unna told Monika, who was hugely pregnant. But it would still be six weeks before I was born into a midsummer of endless light.
***

The dream actually dictated the entire story, how the women were parted and re-united, how Monica got pregnant, and most importantly about the bond between the narrator and Unna who is not her biological mother but who raises her.
I did enough research to confirm that a lesbian relationship would have been tolerated or even accepted in Iceland at that time. Since a lot of the story is about fabric, and imported synthetics, I need to research that too. I know that in Iceland, as in the sub and counter cultures I’ve lived in, fostering a child not one’s own is quite usual, and admired.
But really I’m a bit daunted by what I don’t really know–the role of the Keflavic base in ordinary Icelandic life, real cultural differences between Iceland and how I grew up, and more.
So am I writing what I know, or don’t know? Will I discard the axiom? “I” may not know, but something in me does, I hope.

The following are a selection of haiku poems from Right under the big sky, I don’t wear a hat, the haiku and prose of Hosai Ozaki.

I look back at the shore, not one footprint let

The cigarette is dead, I cast away the loneliness

Dead leaves shake down the trees and broom the blue sky

A pine grove let the children go home and is darkening

Such a good moon, I look at it by myself and go to sleep

http://jacket2.org/commentary/recipe-writing-new-york-school-poem
Thom Donovan
1. at least one addressee (to which you may or may not wish to dedicate your poem)
2. use of specific place names and dates (time, day, month, year)–especially the names of places in and around New York City
3. prolific use of proper names
4. at least one reminiscence, aside, digression, or anecdote
5. one or more quotations, especially from things people have said in conversation or through the media
6. a moment where you call into question at least one thing you have said or proposed throughout your poem so far
7. something that sounds amazing even if it doesn’t make any sense to you
8. pop cultural references
9. consumer goods/services
10. mention of natural phenomena (in which natural phenomena do not appear ‘natural’)
11. slang/colloquialism/vernacular/the word “fuck”
12. at least one celebrity
13. at least one question directed at the addressee/imagined reader
14. reference to sex or use of sexual innuendo
15. the words “life” and “death”
16. at least one exclamation/declaration of love
17. references to fine art, theater, music, or film
18. mention of genitals and body parts
19. food items
20. drug references (legal or illegal)
21. gossip
22. mention of sleep or dreaming
23. use of ironic overtones

I was born on the edge of Spanish Harlem, Mt. Sinai Hospital
on the border between many things:
black people and white people, winter and summer, east side and west side,
daylight and the womb
just after the shifts change at 3:35 pm
under the sign of Taurus–that much was fixed.

I grew up dreaming of a Manhattan I would not return to
of getting lost in the woods by the hippie commune
and coming upon the directional street signs of upper Broadway
on the border between many things
Caribbean islands and cold borough winters, my mother and father, my first and
my middle names.

Little sisters, sitting with you at the Nutcracker
while the music of Jew killing Russia
trickled through the air above the stage
like the confetti snow falling and
falling on the Snowflake Queen
I can’t say if I was happy or sad
just that my velveteen dress over the crinoline itched.

Fuck me! That’s what I learned to say
all those years in Bergen County, New Jersey
an exclamation of surprise or even of affection
as in “fuck me, it’s raining”
but not, as my second husband once hoped,
the imperative, a demand.

Are you paying attention at all to what I’m saying?
On the border here between wanting something
and getting it, between labor and delivery and lying to those in hospice care
between pretending to like Mozart
and actually liking it.

I love you, city of my birth, of hot chestnuts from the chestnut man’s burnt worn
fingers, of deli patrons with concentration camp tattoos on their flabby arms
hanging out of summer blouses, on the border
between survival and a syringe and an all night rave
between standing on the subway platform
in a mini dress that resembles a Frito’s bag
going to a Mothers of Invention concert
convinced nothing will ever happen to me.

On the border between sex and annihilation, a girl coming out of a cocoon, went
in a caterpillar and came out needing tampax
delighted to discover the word Psyche
means butterfly in Greek
delighted to realize
I don’t have to apply to the job
of being a caryatid
that unlike the statue of Atlas carrying the world
at Rockefeller Center
I can walk away, walk away
and no one will care or even notice.