Looking back at a recent trip in upstate New York with my husband Rich, I’m still thinking about tourism and pilgrimage. For example, we saw:

4 diners (in one the waitress had the same name as our cat, which was startling!)

Seneca Falls monument to the rights of women

a shrine to the Blessed Kateri

All of these affected me, but in varying ways and degrees. Stevenson’s cottage was a cluttered tourist trap while Kateri had an exquisite chapel with Native American art. Some are tourist spots for everyone, but not everyone is collecting diners. Of course I cried at Harriet Tubman’s tomb, but the atmosphere was enhanced by dusk, a sprawling cemetery, and mounds in the background.

John Brown’s farm evinced confusing emotions—was he a hero or homegrown terrorist? The monument to him looked very patriarchal to my eyes but fascinatingly was put up in the 1930’s by an African-American club in Philadelphia dedicated to his memory. 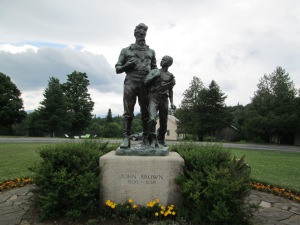 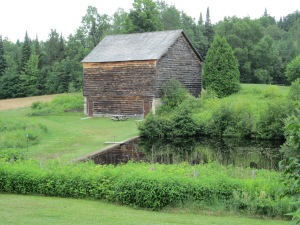 The New York State historical signage is often atrocious to a New Mexican’s eyes—also dating from the 1930’s it is unabashedly expansionist and imperialist and heavy on the “savages.”

Years ago, someone costumed as a city worker with power tools removed the phrase “Savage Indians” from a monument on Santa Fe’s Plaza in my one my favorite guerrilla art acts of all time. Well, upstate New York’s historical signs could use a little editing.