My father, in his prime, was not a calm person. He could be adventurous, but would suddenly panic, as he did on the night train to Florence, Italy.
We were abroad, the six of us, each with a large brown canvas suitcase. The train stopped at the Florence station—Firenzi—for three minutes. Then it went north, no doubt into the Balkans or Bulgaria, carrying those other passengers—gypsies, guitarists, soldiers, assassins—behind the iron curtain.
So we were instructed to hurl first our heavy suitcase and then ourselves on to the platform. Before the train even stopped my father was cramming his suitcase through a cracked window and heedless of four children who might be left behind, he leaped from the train.
He was hysterical, but unscathed. We survived our disembarkation and saw Madonnas draped in blue, and Jesus bleeding on numerous crosses, odd fare for Jews. We ate pasta.

blue mussel shells open—
the briny taste
I will acquire

I often think I would have been happier if I’d stayed on the train, vanished into Macedonia or Armenia, been in my thirties when the Berlin Wall came down and gone some place like Norway to work in the hotel business.

My husband Rich Feldman found this for me–and we checked google and it is true! 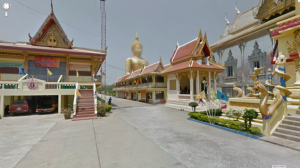 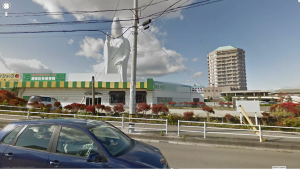 “Ever notice how all the faces are blurred in Google Street View photos? That happens thanks to a privacy-enabling robot. But it’s not a perfect robot. The Google Street View robot not only blurs the faces of humans but also of statues, despite the fact that statues have no notion of privacy. Makes you think, doesn’t it?
Prolific French illustrator Marion Balac certainly believes so. In a new work called “Anonymous Gods,” the artist collects Google Street View images that include statues of gods and their blurred out faces. One’s the Sphinx outside the Luxor hotel in Las Vegas. Another is the monument to St. Francis in Caninde, Brazil. There’s even a giant Buddha on the side of a nondescript road in what appears to be China. So many gods. So few faces.”

I’m delighted to post an excerpt from Baro Shalizi’s novel in progress, THE RISING MOON OF HEAVEN below. He describes the book:

With inspiration from a verse in Omar Khayyam’s Rubaiyat:

Behold! The Rising Moon of Heaven again
Seeks us, my love, through the quivering Plane trees;
How often, hereafter, rising will she search
Amongst these leaves, for one of us in vain!

The novel follows the lives of two young Afghans, as exile, loss and separation, destroys their world and threatens to crush their soul and spirit.

Baro received his Creative Writing Certificate from the Santa Fe Community College and is currently on the editorial staff of “The Santa Fe Literary Review.” His bio note: “Born in India to an Indian mother and Afghan father, I was raised in Afghanistan until the family was forced to leave following the coup that overthrew the King. I have lived in Afghanistan, Pakistan, the Soviet Union and the US. I obtained my B.A. in Russian Language and Literature from Brandeis University and my M.A. in International Law and Business from The American University in Washington, DC. I currently live in Santa Fe, NM.”

The novel is currently looking for representation from an agent, or an editor interested in publishing it. Please feel free to comment as a reader, too!

This is the first of two sections–stay tuned to read the second in the next few days. 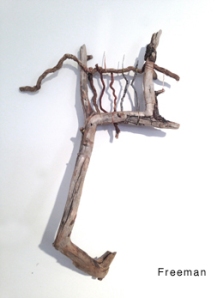 Today in the Spiritual Quest/Speculative fiction class we shared a pomegranate. The fruit is associated with death and re-birth, with Persephone who ate a few seeds and hence has to remain underground during the winter.

So maybe people were a little nervous taking a taste!

A Jewish teacher once told me that as there are 613 miztvot (commandments, or some say, good deeds) there are 613 seeds in a pomegranate. I didn’t count, but like the idea. The Kabbalists say that since some mitzvas can only be performed in a male body and some only in a female, there is reincarnation or transmigration so one soul can complete all.

Soon it will be Rosh Hashana here in New Mexico, with my yard full of sunflowers and grasshoppers. Every year one praying mantis appears–this year it is on the door of my studio. A sweet new year and shalom to all. 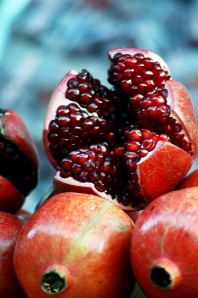 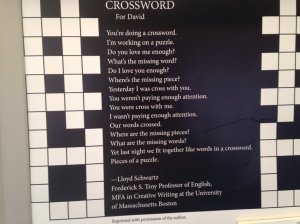 Thanks to Steve Gutherz for snapping this in Boston for me.

I’ve been reading, of all things, COUPLES by John Updike. In my youth, it was a book I searched for when I was babysitting.(And found, sometimes in an underwear drawer). It was about sex, my teen-aged mind assumed. Now I’m discovering that its sometimes purple sometimes exquisite prose is something that would have been decidedly yucky to my adolescent view–the misery of marriage. Which frankly is somewhat yucky to my more than middle-aged one.
However, I’m an archeologist in my own life, often wondering–just what were my parents thinking? They weren’t WASP-Y swingers, as in COUPLES. Or wildly attractive New Yorkers (MAD MEN). But I was raised in the suburbs in the sixties.
Maybe it is because I recently have been reminiscing about elementary school. Or talking to a friend about whether our teen-age years were uniquely bad–driven by social chaos to a more than usual existential pitch. Maybe I’m just trying to make sense of parts of my past because I’m writing more fiction.
Or maybe, as a male friend said about MAD MEN and our generation, “We are ALL Sally.” 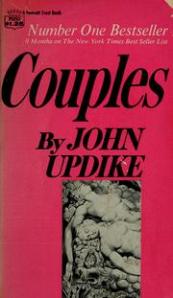 Feels like the first time in a while I’ve had a nice day at home. Thinking about the upcoming Jewish holidays and catching up on my thought and…hand wash. Hand wash was one of the industrious things I did when young but have gotten out of the habit of. My sweaters look good! 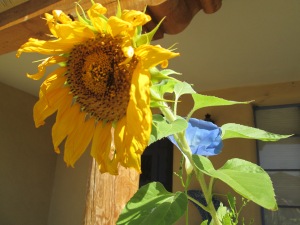 In my endless quest for quirky textile art I was glad to find this. 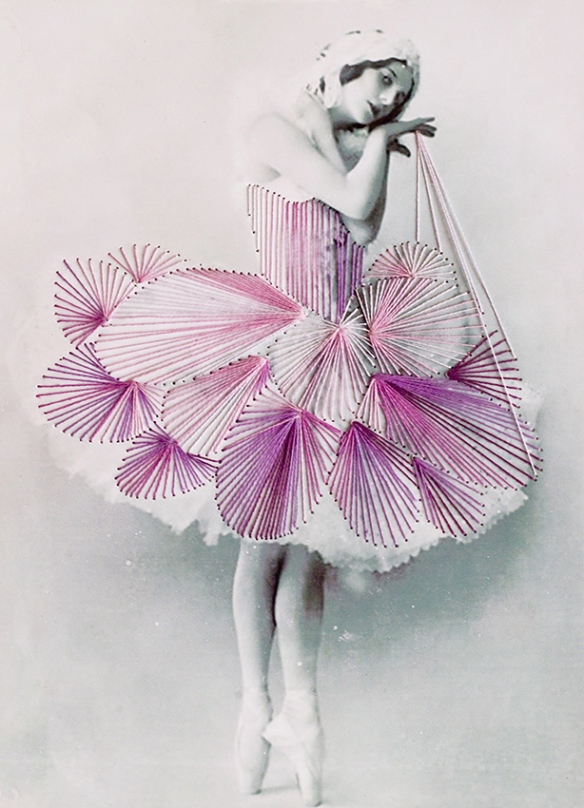 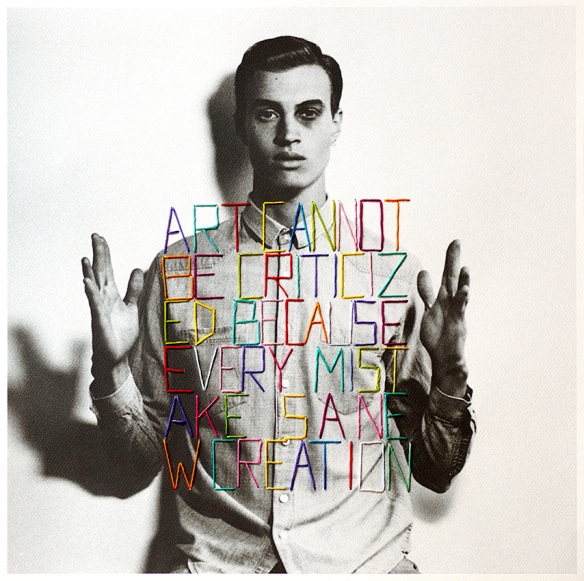 Seriously!? There are so many great embroidery artists out there!

These works are by Chilean artist Jose Romussi, who now lives and works in Berlin.  Romussi’s creations have a very playful vibe to them.  In his series Dance, featuring vintage ballerinas, his thread takes on the shape of the dancer’s costumes.  In his newer work, he appears to be inspired by the forms of the face.  See Romussi’s other work on his website.

By the way, I’m loving the quote in the last picture!

It was wonderful. The first day, which was supposed to be 10 hours, turned out
to be more like 13 courtesy of the insanity that is the DC Beltway, my
stubbornness, and an accidentally silenced GPS, so I ended up on 95 heading
south instead of 81. It was still a wonderful day. Once I turned the GPS back on
and paid attention to it, I spent a rapturous hour following its instructions
through the exquisite Virginia countryside back to 81. That was the only
muck-up. For which I can take no real credit, since once you turn right off of
81 onto 40, it’s pretty much a straight shot. I’d done the drive once before,
but with my elder daughter and her College of Santa Fe roommate from NYC and
loved it then. I remembered Tennessee as being seriously beautiful (true for
eastern TN) and that the Panhandle of Texas was weirdly thrilling (I have a
funny relationship to the accidental state of my birth). And it was. As was the
gradual movement toward bigger and bigger skies, and then bigger and bigger
mountains.

A solo roadtrip is very, very different from a shared roadtrip (of which I am
hugely fond). The solo version is a weird, alternate-dimension space in which
you really need to pay attention to things like when the next rest-stop is, how
your body is feeling, where the next gas station is, whether you’re signaling
lane changes, and how the driving cultures differ from state to state.
Everything else is pretty unimportant, as long as the weather doesn’t make
itself an issue. Everything. You really do need to pay attention, to be deeply
mindful of things you don’t tend to think much about, even though they are
themselves odd things—important, but without inherent profundity or connection
to anything else in your life. I suppose the 2,000 mile drive is as close as I
will ever come to the focus, work, and quiet of a week of zen sesshin or a solo
trip on the Appalachian Trail.

I arrived in Santa Fe safe and sound, and feeling better (though tired—next year
I’ll give it 5 days), more myself, than I have in years. More alive to all the
things that are right, blessed, good, and joy-giving in my life than I have been
able to be for years, maybe forever—which is not to say that I have been unaware
of them, or un-alive to them, but that there’s been a scrim, a membrane between
my heart and those gifts for a long time. I wasn’t a different person, and not a
converted person, just a person with a great many cobwebs blown away by 4 days
of road and solitude and huge skies. The last time I experienced anything like
this was the day my first working SSRI kicked in and I felt as if one of those
huge, spherical diving helmets had been lifted off my head without my ever
having known I was going through life wearing one. All of this sounds very
dramatic, and it wasn’t. In some ways that was the best part. I got to Santa Fe
a little early to check in at the conference, had lunch at a diner I like and
read for a while, then went up the hill to St. Johns, where the Glen is held,
checked in, unpacked, went to the reception to find and hug my Glen tribe, and
just slid into a scene I know and love.

So step 1 in Moving Through the Existential Crisis of 2014 was letting go of my
only-in-my-head nemesis and actively wishing her happiness. Step 2 was a bag of
plastic beach-toy sand-mold letters (which is another blog entry altogether).
Step 3 was 4 days alone on the road through radically changing landscapes. It
certainly isn’t the recipe I was looking for back in January. And all through
the intervening months. And it is certainly not what I’d ever have thought would
work. Which is undoubtedly the nicest way it could have happened–by surprise.