This upcoming Thursday, January 28th, is the 2nd anniversary of the death of Welsh poet Nigel Jenkins. Nigel was the co-founder and director, along with Stevie Davies, of the Creative Writing program at Swansea University in Wales, when I went there in 2009 to start my PhD.
I met Nigel at a new student gathering at the University a few days after arriving in the U.K. I was still very jet lagged, muzzy, and beginning to wonder what in the heck I had gotten myself and my husband into … moving us thousands of miles to attend a graduate program in another country where we knew no one and had no real means of financial support. Nigel was gracious and jovial at the meeting. Since the department had been too stingy to have any supplies brought in for the party, Nigel had brought wine and treats himself. He mentioned a walking tour he’d be giving the following week through Swansea for all interested.
A week later on a wet afternoon (the rain had cleared just in time), Nigel led about a dozen of us from the University, through Singleton Park to the Uplands, by Dylan Thomas’ childhood home and through Cwmdonkin Park (mentioned in a couple of Thomas’ poems), to Townhill – with its post war “Council Estates” (which I came to learn could be roughly translated into American English as “The Projects”. Townhill gave us a stunning view out over Swansea Bay, across the Bristol Channel to Devon. We traipsed back down into the town centre, across the busy Kingsway, past the Market, over the Tawe River to the docks. Nigel was a stellar guide. Each place, each path, each building had a story for him. Whether it was the 9,000 year old tree stumps visible at low tide in the Bay – a reminder of the fertile river valley which existed there before the sea swept in at the end of the last ice age, or the clock tower which served as a landmark for German pilots on bombing runs during WWII, or the hotel where Allen Ginsberg once stayed while doing a reading at the University. We ended up at a narrow pub on Wind Street (just past “Salubrious Passage”) drank beer and ate snacks, talking poetry and geography.
Over the years I was at Swansea, I can’t remember one poetry reading or student event which Nigel did not attend. He was a regular at the monthly open poetry readings at the Dylan Thomas Centre (“Poets in the Bookshop”). He sat through the poetry of rock-stars-poets, students, and Swansea retirees alike and every so often, if we were really lucky, he would get up a read something himself – his deep, melodic Welsh accent turning every line into music.
In addition to 15 books of poetry and 9 of prose, Nigel authored radio plays, stage plays, and articles. His prose largely centered on what he called, Psychogeography (with its Situationist, Dadaist, and Surrealist roots). He wrote two books on Swansea, “Real Swansea” (1 and 2) – far surpassing the pedestrian notion of either guidebook or urban history. The books wander, much like his walking tour, through a landscape peppered with history and memory, playful, often irreverent, and always deeply heartfelt. The books are filled with both his poetry and his dry wit. He also wrote two books on the Gower Peninsula which abuts Swansea. Gower is a wildish peninsula of beaches, cliffs, little villages, old stone churches, gorse, farms, sheep, and wild ponies, which was Nigel’s childhood home. These books, with gorgeous photos by David Pearl, are filled with his haiku and poems.
The images here are my own from ramblings on the Gower and I am including a few of the haiku which Nigel included in his book, “Gower.” And here is a link to Nigel reading what I think is one of his greatest poems, “Snowdrops.” A chance to hear Nigel read his own words is well worth clicking the link: http://www.nigeljenkins.com/aa_film/film008.htm

plough and tractor
mobbed by gulls; the sheen
of bladed earth

in anchored flight
from the barbed fence –
spider-lines, horsehair 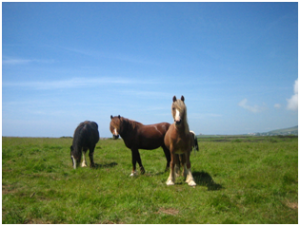 ‘beware,’ says the sign
at the churchyard gate,
‘of unsafe gravestones’

gull hooked, trailing
from its beak a yard of line –
o for a gun

the rains
in breeze-rushed leaves,
transformed 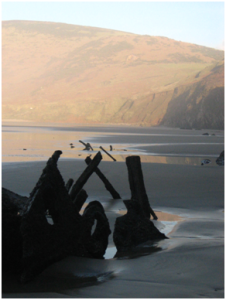