There are ten poetry posts on Santa Fe Community College’s campus. I’m still curating them, if retired. Yesterday I walked the posts and put up 10 haibun from Angelee Deodhar in India. They speak of her many journeys, inner and outer. 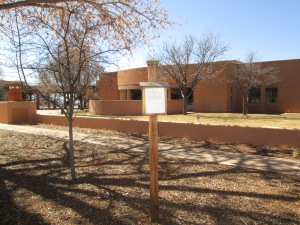 The Courtyard in Campus Center has two posts. 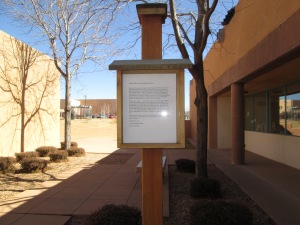 Courtyard C may have an uninspired name–but it’s a lovely serene spot to the east.

The post closest to the Fitness Center has a gray water faucet on it. And a neighboring post for birds:

Here is one haibun. But to see the rest you’ll have to take a walk!
***

Pilgrims, old people, lovers, mendicants, families, childless couples hoping to be blessed with offspring, all promising offerings in gold, silver, coins or paper money, all seeking something . . . blessings from a swayambhu stone phallic symbol . . . they flock to this mountain shrine every summer crossing treacherous terrain, rocky streams . . . making the keepers of the faith rich, those who could have helped but did not warn the thousands of the impending disaster, that they should move to higher ground . . . and then came the rain . . .

The shrine is surrounded by precarious shanties clinging to the mountainside, by hotels, houses, shops selling everything for worship . . . whatever one needs to appease the gods . . . flowers, coconuts, tinsel, veils, saffron, incense, betel nuts and empty plastic bottles to take the sacred waters home . . .

Sudden flash floods following slashing rain brings down the dwellings hanging by a prayer . . . the deluge furious washes it all away except the black stone shrine housing god . . . the brass Nandi remains upright facing the lingam . . . after the raging torrent subsides the debris of rocks and boulders are interspersed with dead bodies plundered by those left alive . . . sadhus steal from the dead . . . those with a few rations left steal from the living . . . the river accepts the human sacrifice and rushes on . . . and then the rain . . .

touching wood
on her wall and desk
the primeval forest

Swayambhu means “self–manifested” or “that which is created by its own accord”.

The lingam, meaning “mark”, “sign”, “inference,” is a representation of the Hindu deity Shiva used for worship in temples. Sādhu denotes an ascetic, wandering monk. The sādhu is solely dedicated to achieving mokṣa (liberation), the fourth and final aśrama (stage of life), through meditation and contemplation. Sādhus often wear saffron–colored clothing, symbolizing their sanyāsa (renunciation).

Nandi is now universally supposed to be the name for the bull which serves as the mount (Sanskrit: Vahana) of the god Shiva and as the gate keeper of Shiva and Parvati.

In June 2013, the North Indian states of Uttarakhand and Himachal Pradesh, some regions of Western Nepal and their adjoining areas experienced heavy rainfall that triggered devastating floods and landslides. Damage to bridges and roads left over 70,000 pilgrims and tourists trapped in various places many of whom were rescued but more than 1,000 people have died with many more are still missing.