And so does Gail Rieke’s peripatetic Flying Carpet–http://ridetheflyingcarpet.blogspot.com/ 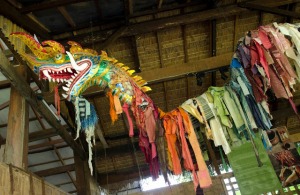 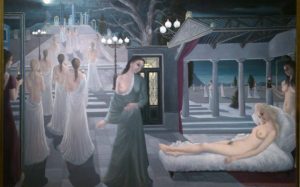 By Leslie Ullman (from Natural Histories)

After “L’Acropole,” by Paul Delvaux

First he noticed my
face, he said.

At a distance
the bones surfaced,

they split the light
into pools of no light

and my hair, he said,
so colorless

yet full of breath.
He would walk

into it, he said.
He would disappear.

I undressed for him,
the room so familiar

it contained no odors.
The white walls,

their shadows in place
fell away, and my body

Cheryl Marita is several things in my life–student (writing), mentor (death and dying) and friend. I’m re-blogging some of thoughts here–how cool to see Amanda Palmer integrated into this kind of thinking.

Then I went to a panel discussion of some local writers about their writing life. One of the writers recommended Amanda Palmer’s book, “The Art of Asking.”

Slammed me against the wall. All three in one day. Asking. Communicating. Asking some more. Comes down to the courage to ask. It’s a risk. It’s about knowing ourselves.

Asking the doctor about tests – what’s the benefit, what will it do for me? Will the results add comfort to my life at 88? How about at 72? Will the tests help me achieve my bucket list?

via Opening My Eyes at 72

I always rehearse my poems aloud, so I have a careful and somewhat consistent relationship to the breath — variations on a type of breath, I’d say. I experiment with lines, seeking different ways to represent that breath. I almost never use traditional forms, unless I’m going for a specific spoken-word cadence, and even then I’ll alter the form. I do sometimes borrow the experiments of other form-breakers, Anne Sexton’s most of all. But usually I’ll use the line, and projective lines, to attempt to visually capture the experience of dramatic or operatic voice.

Almost all of my poems are an exploration of my own body or someone else’s. I call the former category non-fiction, since I know my own body as well as anyone, and the latter category fiction, since I am speculating on the experience of someone else’s body. For the purposes of poetry, I make the assumption that the mind and body are eternally interdependent. I don’t believe that in a scientific sense, but this simultaneous interdependence is true for as long as we live, and I don’t write about the experience of being dead.

I don’t necessarily compartmentalize my consciousness in that way, so that I might identify a part of my existence as “being a poet” or not. I suffer from major depressive disorder, which I suppose is more likely to cause the poetry than the other way around, and although I dislike that, I wouldn’t know how to compartmentalize it from the rest of my consciousness, either.

I suppose some poets dislike the practical aspects of being a poet — namely, that there’s a lot of us, and no one outside of the poetry world cares about any of us. That doesn’t bother me. Rather, I am grateful to not have my income related to my artistic output. I want as few restrictions on my artistic growth as possible, and reject financial, academic, or social systems which might inhibit said growth. Of course artistic growth comes from exploring the artist’s interaction with society, not from attempting to reject society. But society has its traps, and it’s good to be a poet who can ignore those.

Biographical Note: Jonathan Penton founded http://www.UnlikelyStories.org in 1998. Since then, he has lent editorial and management assistance to a number of literary and artistic ventures, such as MadHat, Inc. and Big Bridge, and technical assistance to organizations like 100,000 Poets for Change, the New Orleans Poetry Festival, and Lavender Ink. He has organized literary performances, and performed himself, in places like Arkansas, California, Chihuahua, Colorado, Florida, Georgia, Illinois, Louisiana, Massachusetts, New Mexico, New York, North Carolina, Ohio, Texas, and Washington, state and DC. His own books are Backstories (Argotist E-books, 2017), Standards of Sadiddy (Lit Fest Press, 2016), Prosthetic Gods (New Sins Press, 2008), Blood and Salsa and Painting Rust (Unlikely Books, 2006) and Last Chap (Vergin’ Press, 2004).

2 Second Fix: I Don’t Want To Work At Love

I always start to feel bad when folks talk about “working” on relationships. I’ve never been a huge fan of work. It implies making an effort I wouldn’t otherwise for a monetary pay off. I’d rather play. Or engage in an activity for itself. I’ve certainly worked—heck, I’ve got a pension—but I don’t want to “work” on my marriage.
I’d rather play. I do put a lot of time and energy into the relationship. It’s pretty much my fave activity, my best hobby. I try to be entertaining, and thought provoking, friendly, supportive. I like to flirt. I try to not just wear schmattas around the house. I want to be honest, and even uncomfortable in my pursuit of intimacy. To let things change. Develop. Experiment.

Thank you, Ursula Le Guin, for inventing a planet where the word for “work” and “play” are the same.

SANTA FE CLAY
Everyone smiles as you drift past the flowers…

AN EXHIBITION OF NEW WORK BY JESSIKA EDGAR

PLEASE JOIN US FOR THE OPENING NIGHT RECEPTION

“I’m interested in ideas of socially-constructed identity and value. My research explores contemporary popular culture and how we perceive mass media influences propagating consumption. Drawing from media imagery – especially that related to gender, beauty, and material desire – my work aims to create a feeling of cognitive dissonance.

Everyone smiles as you drift past the flowers… is a direct response to the current obsession with extravagance and the space inhabited by a simultaneous feeling of distaste and desire. The pieces reference contemporary fashion trends capitalizing on the political climate and eagerness for social change. The work is all hand-built ceramic and mixed media, incorporating textiles, faux fur, beading and other adornment.” – Jessika Edgar

Opening Friday, February 23
With a Reception From 5 to 7 pm

IN MEMORIAM:
Vibrations of the Eye, Mind and Soul