There are items that never seem to move (study Hebrew) and items that are easy to get to (mail friend’s birthday card). And items that involve thought.
For months I’ve stared at the item “find more writing space during pandemic” which involved various fantasies about rentals and more. Some would say I already have working space–a nice bedroom that was my daughter’s childhood pad, a shared studio for art, and hey…wait…in my backyard a hundred square foot studio built by my brother twenty-eight years ago. With peeling paint, old linoleum, a bit of mold from carelessly watering a half dozen geraniums…
Taking a moment to reflect, I realized there was no reason for the geraniums to continue to live there when they would be fine in the living room. And no reason for a sweet space to continue neglected
Matt Morrow did what he calls the “refresh.” And took the photos, too. I can’t wait to move back in–maybe by tomorrow! 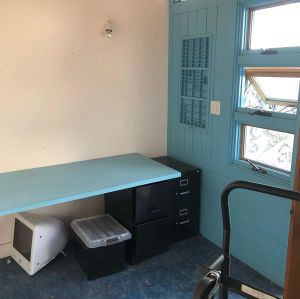 Malena Mörling was born in Stockholm in 1965 and grew up in southern Sweden. She is the author of two books of poetry: Ocean Avenue and Astoria. She has also published translations of work by Nobel Laureate Tomas Tranströmer and together with Jonas Ellerström, a collection of the Finland-Swedish poet Edith Södergran, On Foot I Wandered Through the Solar Systems, the collection 1933 by Philip Levine into Swedish, and they have edited and translated the anthology, The Star By My Head, Poets From Sweden published by Milkweed Editions. Mörling has received a John Simon Guggenheim Fellowship, a Lannan Literary Fellowship and a Dianna L. Bennett Fellowship from the Beverly Rogers, Carol C. Harter Black Mountain Institute. She is a Professor of Creative Writing at The University of North Carolina, Wilmington and currently living here in Santa Fe.

below a strand of Elms
is also to vanish.

From “To Forget Who You Are.”

Ten of her poems are now on the Poetry Posts on SFCC campus. Curated by Elizabeth Jacobson, Santa Fe Poet Laureate. 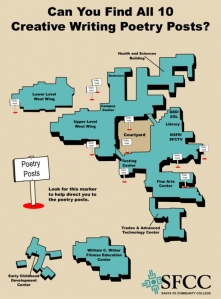 Shame is a social emotion–I might feel guilty all by myself but I need someone watching to feel shame. And it is a horrible emotion–something dogs and toddlers alike don’t enjoy.
People may profess to be against shame and shaming, but it has become pandemic in this…pandemic. The next time you encounter the urge to shame someone or are shamed, consider the opinion of a Harvard epidemiologist–shame doesn’t work.

Julia Marcus is an epidemiologist at Harvard Medical School and a contributing writer for the Atlantic who has penned a brilliant series of essays about how to think about risk in the midst of this pandemic. Marcus’s starting point, which emerges from her previous work on HIV prevention, is that an all-or-nothing approach is blindly unrealistic: Everything is a trade-off.

Here is an interview with her in VOX.

Ezra Klein
Does social shaming and scolding work as a communication strategy around public health?

Julia Marcus
I generally try to stay away from absolutist responses, but my instinct is to flat-out say no: Scolding and shaming are toxic to public health. Almost full stop, with very few exceptions.

I think it’s a natural instinct to want to shame somebody for several reasons. One is we’re watching people do what we perceive as risky, and it’s not just putting themselves at risk — we’re watching them potentially put others at risk. There’s a lot of frustration and anger that comes up in that situation. But from a public health perspective, trying to shame somebody into changing their behavior just doesn’t work. It doesn’t deter the behavior generally. For some individuals, it might, but on a general population level, what it will do is actually just deter disclosure of the behavior. So if we think about what shame is doing, it’s essentially saying you’re a bad person for doing this.

After Rosh Hashanah, Jews cast bread crumbs into a body of living water where the bits can be eaten by fish. The participants symbolically cast off their sins this way, while reciting prayers of repentance.

some call it sin,
the poorly done, the undone,
of these
self-hatred
is the worst

every driver’s lips
are moving
in the traffic
on Cerrillos Road
in the city
of the Sacred Faith
we pray in our cars
while maneuvering
angrily, carelessly
without precision
in our turns

now I just
pray for rain.

6. What is the baby hiding?

7. the stuffed monkey
the old woman she will become

Rain-swept gray
churning into buoyant blue
we are two starstruck arrows
splitting the sky
our game of scrabble?
unfiltered bits of cider
in brownian motion
drift in our glasses
so unlike the dipper
in its circumambulation
you meet me head on
spinning and pinpointing
you play compass
dark-space negatives
plying the Great Rift’s blacks –
Partridge, Snake, Fox, Llama Mama
I respond with sextant
ohhh! we drink and howl
in this the season
of courage
space being curved
the maple outside the window redshifts
I say let’s tent
beneath the night shadows
of Atacama’s radio telescopes
you say first we’ll trace
the Bears Ears’ petroglyph
of two starbeings’ hands
meeting across space
precious these deserts
destined to fade
but for this one shiny moment
joy is a transect
Lodestar, you
scintillate my darkmatter blanks
our starspangled trajectories
never small magic

I am particularly interested in the feminist show curated by Lucy Lippard because I like the artists such as Kathleen McCloud and my daughter Isabel Winson-Sagan.

So I was very sorry to hear that the mobile gallery had its windows smashed:
https://www.sfreporter.com/…/…/axle-contemporary-vandalized/

Langston Hughes is one of my favorite poets! Pictured below is Molly Schoenhoff of Athens, Ohio, at work chalking a homage to Hughes, part of a project she’s developing in cooperation with Athens Poet Laureate Wendy McVicker and activist Debra Spangler.

You can see more of her super-creative artwork at https://www.mollyschoenhoff.com! 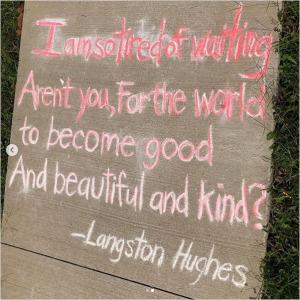