I was fortunate to see this show at the Museum of International Folk Art a few days ago. I’ve always been fascinated by war rugs–in fact, I bought the first one I ever saw–a small one now in my study.
I think of them as textiles of survival, like the embroidered pieces of the Hmong people, pictorial quilts from Holocaust survivors, and Chilean arpilleras created under fascism.

From Combat to Carpet: The Art of Afghan War Rugs(from the MOIFA website)

The Museum of International Folk Art (MOIFA) presents From Combat to Carpet: The Art of Afghan War Rugs, opening January 12, 2020 and running until August 30, 2020. From Combat to Carpet is a traveling exhibition curated by Enrico Mascelloni and Annemarie Sawkins and features more than 40 handwoven rugs with war-related iconography collected over the past forty years.

War rugs “are the production of women artists, and of communities speaking globally not just locally,” said co-curator Annemarie Sawkins. “War rugs reflect Afghanistan’s historic and modern place as a busy cultural crossroads. They reveal the observant and innovative nature of the people who produced them.” Afghan “war rugs” gained international attention following the Soviet invasion of 1979 when millions of refugees fled to neighboring Pakistan and Iran.

This unique subset of handwoven rugs can teach us about the innovative nature of rug design and production, as well as the long history of foreign involvement in Afghanistan. Rug producers, provoked by decades of traders and invaders in the country, adapted traditional motifs and compositions, translating them into depictions of world maps, tourist sites, weapons, and military figures. Such war rugs have proven popular among occupying military personnel, journalists, foreign aid workers, international collectors, and contemporary art curators. Over the years, rug makers have continued to update popular imagery and themes to reflect current events, changing technologies, and the tastes of potential buyers.

The emergence of war-related imagery in Afghan rug design has clearly aided the economic survival of area weavers and displaced craftspeople through years of armed conflict and cultural disruption. What war rugs mean to individual weavers is less understood. Are war rugs a celebration of modernity or a rejection of war? Are they a witness to shared trauma or a commercialization of violence? Are they testaments to ingenuity and a spirit of survival? Perhaps they are all of these things at once. 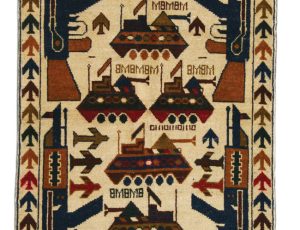