Here is a one-line haibun, written about a decade ago when I was in residence in Great Basin with Center for Land Use Interpretation.
Paired with a photograph by Isabel Winson-Sagan, taken recently in Canyonlands/Moab, Utah.
Range

Numbers 1-15 on the shooting range out on the salt flats–the magic of numbers in a landscape: sequence, meaning, or the appearance of meaning.
I drew
this mountain range
with one line.

I’ve been following the discovery of ancient footprints at White Sands with interest. The most recent thinking pushes back the date that people first came to North America. The tale below is a story within a story, part of my unpublished novel “The Future Tense of River.” It was inspired by perhaps the oldest hominid foot prints in an African rift valley. For the purposes of the book, it is set on the Colorado Plateau.

What the Rift Told
She kept one eye on the mountain and one on the dying woman. It had been a difficult few days. When the mountain started to spew hot mud and the earth shook and shook, everyone decided to break camp. They’d seen this before. First mud, then ash, then an eruption with earth slides that took down trees and everything else in the path of destruction.. Sometimes fire. Better to move. The dry riverbeds were a barrier, the old-timers said. After that, the delta, the lake, fish, and a change of camping grounds. Summer was coming. They’d been here too long. The proof—a trail of smoke from the collapsed caldera.
But her mother’s sister’s daughter was in labor. Too long, exhausting, swollen. The child lay sideways, and she couldn’t move it. Actually, she suspected the child was dead. And the mother soon to follow. But she couldn’t leave her, not a mother cousin, really not anyone. She kept her two boys with her, lying to herself a little that they’d suffer without her. When of
course they wouldn’t. Anyone could care for them. She’d follow the others later. But she kept them.
And then told them to amuse themselves. Get dinner, grubs, lizards, locusts. They gorged themselves, roasted things to a crunch.
Mama, said the younger one. Is that God? He pointed to the mountain.
No, she said. God is here. And she put his hand to his heart.
But…he said.
He’d seen her offer food to a blue stone, feathers to the wind.
There are little gods everywhere, she explained. Each thing has its god. And there is the big God, inside. And the ancestors of the mothers…there are many things that will help you. Many things.
By now her cousin was beyond hunger or thirst, bleeding out, just a whimper. The mountain rumbled, stinking of mud and ash. Dust started to fall, closer, poisonous. The child lay crosswise and the would-be mother died. She’d have to leave them, come back in four seasons for the bones to gather, disarticulate, smear with red, and bury in a basket. Unless the mountain buried it all first.
Come on come on, she told her boys. We leave now. No more playing slap the hand or hunt the antelope. Run! The younger was on her back, heavy but not that heavy. First child had her hand. Walk walk. Now run! Her legs were long, very long for a woman. She’d seen summer seventeen times, she wasn’t yet old. Faster. They stepped in mud, ash falling. Trotted uphill, down again, and there was the valley. Across the dry riverbeds. The air cleared a little.
Camp could not be far, two days at most. They could walk all night, the little one asleep on her back. Rest in shade in the day. They’d see the others soon. Her own mother was gone, mother’s sister too. She felt the pull of grief in her belly, the mother and child she’d lost.
Mama, said first child, squeezing her hand. Mama, we ran so fast, it was like flying.
She wondered for a moment why she felt she’d left something behind, besides her failure to save mother or child. Maybe just two sets of footprints in ash.

The great land artist Nancy Holt died earlier this month. Coincidentally, I’d been writing about her for a rather eccentric memoir piece I’ve been working on. Working title–“Geographic” as in the mental health slang phrase “pull a geographic.” (i.e. “Those junkies should have gone into rehab but instead they just pulled a geographic and left Brooklyn for Vermont, hoping it would work.”) The memoir is about my relationship to time and space.
So here, in honor of Nancy Holt:

I identified with Nancy Holt because she and I were both married to men named Robert who died young.
However, her husband was Robert Smithson.
Her work fascinated me because so much of it was about location.
We lived in the same town, knew people in common, but when I heard her lecture I sat in the back and was overcome with unaccustomed shyness as she signed a copy of her book.
I published poems about her but was too embarrassed to send them to her.
She seemed “real” in some kind of luminous way, although rationally I assumed she was quite ordinary in her daily life.
She was a tie to a mythic age of heroic artistic endeavor, but more than that, her art shocked me. I did not know that anyone could think like that (although it was a way I was perilously close to myself).
I walked in her piece Dark Star Park in suburbs outside of Washington. D.C. Although the site is about location in time, it also seemed to be about grief.
Each year we unwittingly pass the day of our deaths. And when young, passed dates we couldn’t yet see–anniversaries both ecstatic and abysmal.
I have never seen Holt’s iconic work, Sun Tunnels, although I was close. I was living in a tiny trailer out on the salt flats in Utah, in the abandoned Wendover air force base. Easy to say, but not that easy to do–scary, windy, desolate.
I shared this residency with the Center for Land Use Interpretation with a young photographer from East Berlin, call her “Vi.” We were glad of the company at night, both of us nervous.
A rainy day, creatively dry, east Nevada blacked-out for electrical work. We thought about heading to Sun Tunnels but somehow daunted ended up exploring mining roads and a redneck bar that Vi, no American, assumed would be fine. Which it surprisingly was. We drank cold coffee and when the lights came back on treated ourselves to a steak dinner in a casino.
A year later, we crossed paths for a minute–Vi, car packed, was leaving the residence as I arrived for a second stint.
I spent a week alone in the rattling wind. All fear had left me. I was calm and happy, in a direct confrontation with this world as it was. I looked at the sun too long and burned a retinal after image–a tiny image of the sun that projected itself everywhere I looked for over an hour.
Vi was headed for Sun Tunnels on her way back to Salt Lake, and home.

I love holiday lights, and I’ve seen some spectacular ones: the Phoenix zoo, Tucson’s Winter Haven neighborhood, Carlsbad from a boat on the Pecos. Now Santa Fe has a small but very sweet array at the Botanical Garden on Museum Hill. It is elegantly lit with limited but repeating motifs and globes that change color.

Best of all, Christy Hengst’s ceramic birds are in residence, including many of the flock that began its existence as part of “Wendover Landing” at 516 Gallery, with images of Wendover, Utah and text from my poems and one-line haiku. 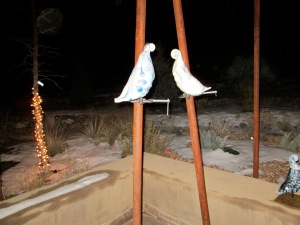 I happen to be lucky enough to have two in my garden, so I know the shape is enhanced by being outdoors.

It is very festive and I highly recommend a visit. 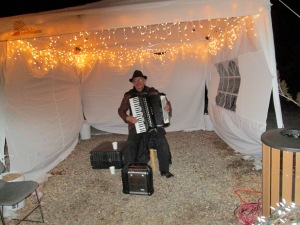 ***
In addition, Christy’s new project–mugs based on specific places and peoples’ recollection of place in Santa Fe–will be on display at Tune-Up, our local bistro mecca, this Saturday 2-5pm. Come early to buy your favorites! You can also participate in the project and fill out an interview.
I feel very blessed and inspired to be connected to these events! 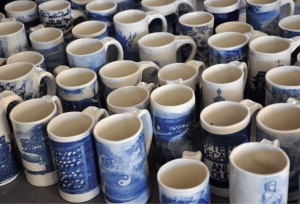 Santa Fe Botanical Garden hosts an unusual flock of birds – the protagonists of the international public art project, Birds in the Park.

Retired from their international travels, the birds will alight awhile at the Botanical Garden, to launch a new show entitled Birds in the Garden. The porcelain birds have cobalt images and text silk-screened and fired onto them, investigating aspects of humanity, specifically around war and peace.

There will be a special grouping of iron-on-porcelain birds that are based on haikus by Santa Fe poet, Miriam Sagan. In the spring, we are expecting some new arrivals of birds made specifically for the Garden.

The birds have previously landed in over sixty locations, including many places in Santa Fe, Central Park and the UN Headquarters in NYC, beaches along the coast of California, the National Mall in Washington, DC, Chartres Cathedral in France, the weapons development sites of Los Alamos, NM and Peenemünde, Germany, and even migrating as far as the Galapagos Islands.

Visit the birds during Garden open hours, Wednesday through Sunday, 10am to 3pm during winter hours and seven days a week, 9am to 5pm during summer hours.
All the birds are available for purchase for $300. A portion of the proceeds will benefit Santa Fe Botanical Garden.
About the Artist

Christy Hengst’s art work has manifested as site-specific projects out in the public realm and as paintings.

Public art projects involve clay and have included a large sculpture for a plaza in Ecuador, three bus stops in Santa Fe, NM and the more recent traveling public installation Birds in the Park.

Solo shows of Hengst’s sculptural paintings from wax and porcelain have been presented in museums and galleries in the US, Germany, and Ecuador. She has also taught in those countries.

Born in the US, Hengst is based in Santa Fe. She is married to blacksmith Helmut Hillenkamp, with whom she often collaborates on projects, not the least of which is their two children. More information available at www.christyhengst.com.

Yesterday was a gala for Christy Hengst‘s bird project. The documentary film on the worldwide project screened at the Santa Fe Film Festival. Her book is out from Axle Arts, and over a hundred birds gathered around CCA.

Just as we were blessed with the first real snow of the season.

There is also some interesting work in the CCA annex–views of gold mines done by artists in residence with CLUI in Wendover and work from students in the Land Arts of the American West program. 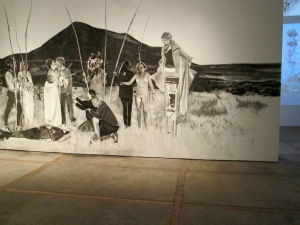 Bit of my poem about Great Salt Lake–to see all, check out Poem of the Week at The Toucan. 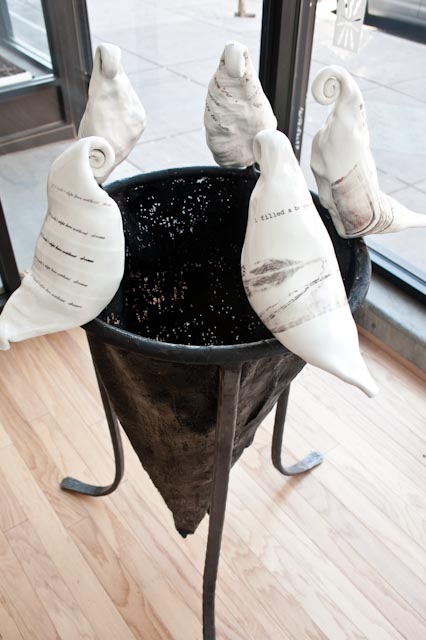 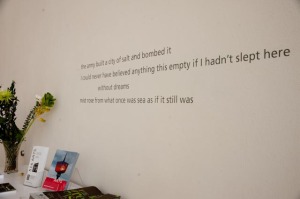 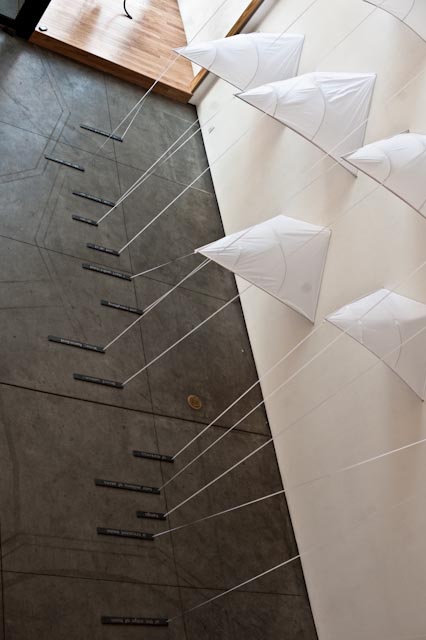 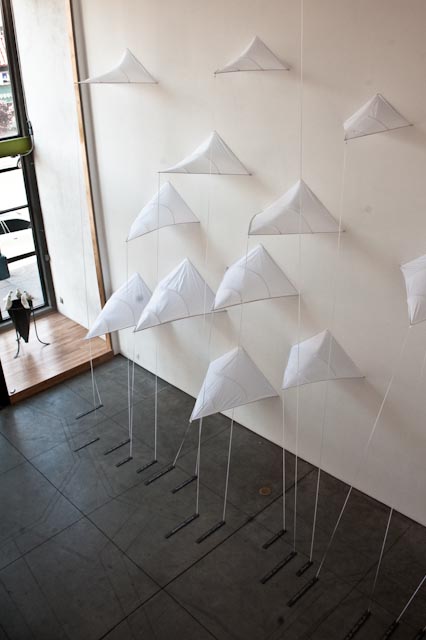 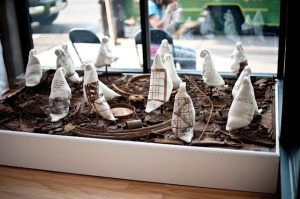 Just a reminder, the show is up at 516 Arts in Albuquerque until August 11. These fabulous photos of the opening just in from Matt Morrow. 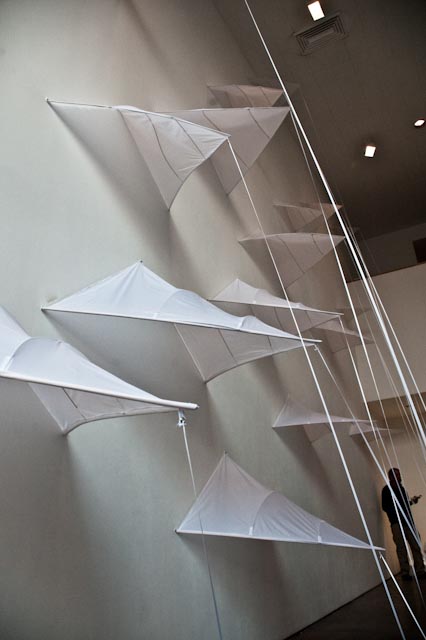 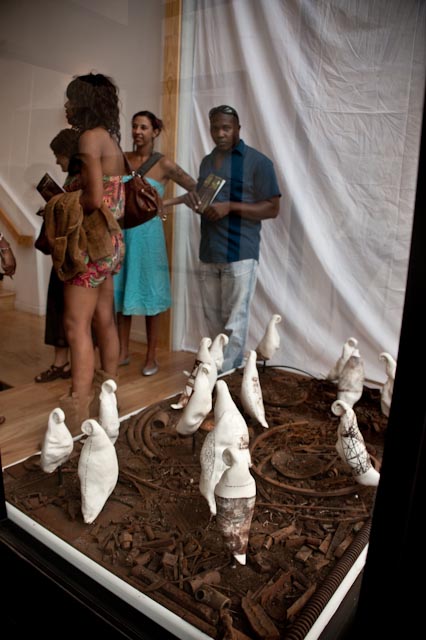 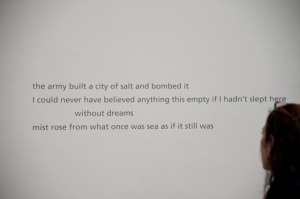 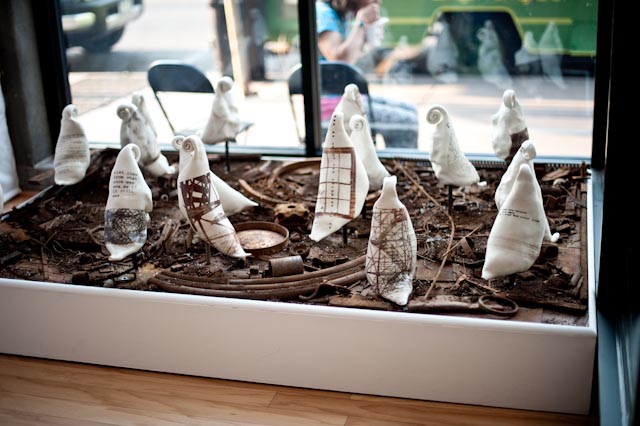 And Joan Logghe was there!

Photographs are courtesy of Christy Hengst.

Curator Suzanne Sbarge–without whom none of this would have been possible. 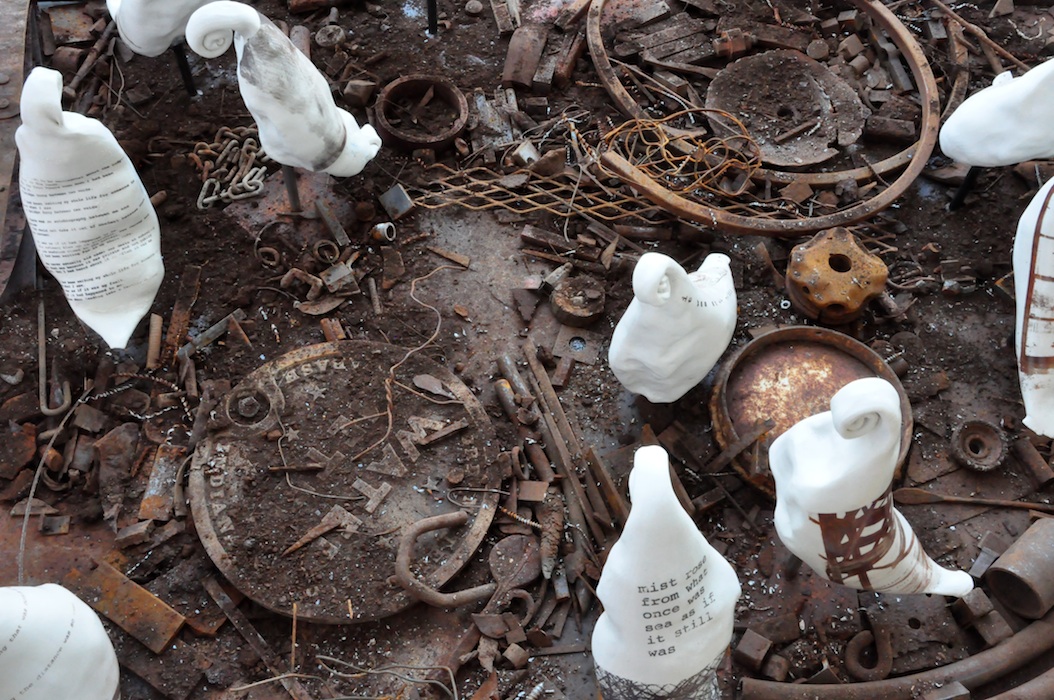 The birds on salt–some of this salt was actually brought back from Wendover, Utah by the artist. The rest is Morton Salt, which has a plant outside Wendover, so it comes from there as well.

***
By the way–the birds are for sale–just ask me for details.