The National Women’s History Museum (NWHM) is pleased to launch Women Writing History: A Coronavirus Journaling Project, an initiative designed to ensure that women and girls’ unique voices and experiences are not left out of the telling of the COVID-19 story. Through this project, women and girls of all ages can participate through the simple act of recording their daily thoughts and experiences during this time in order to document the impact of the coronavirus pandemic on women’s lives.

You can fill out a form on their website to participate.

But it got me wondering again about journals and marking time. And now I wish I’d started a knitting or textile journal at the start of the pandemic (although I’ve never gotten this kind of thing to work!).

How are you marking time? Are you? Last week I started a new one-line journal–it is five years but I’m aiming for one. I like this kind of thing, but am not always dedicated to it. I always have a notebook in hand, but it isn’t always much of a diary. Of course I’ve published two books of journals, Dirty Laundry and years later A Hundred Cups of Coffee. But these were limited by time as well as marking it.

I’ve always wanted to keep a super secret journal…Now that my papers are archived in the Wittcliff Collection in Texas I sometimes throw out something too personal so I’m not tempted to send it.

I have been in at least 3 earthquakes.

I have visited a locked ward, seen a baby born, been in the audience for a prison play, and seen three corpses right after death.

I have been to a mariachi mass, in a mikvah, and lived in a Zen monastery.

I have been in a mosque.

I have seen my cervix.

I have been to massage school where we worked naked.

I have been to neo-pagan rituals, Pueblo dances, and the Macy’s Day parade.

I have had my heart broken.

I have stayed at the Plaza Hotel in NYC.

I have been in a union.

I have solved a koan.

I have hallucinated a dead person.

I have shot a gun.

I have been in a rock band.

I have cooked tofu.

I have kept a secret for twenty years.

I have streaked naked at a swimming pool in the Yosemite Valley.

I have spent a week in a trailer in an abandoned air force base at the edge of a bombing range in Great Basin.

I have marched on Washington.

I have performed in public on the marimbas.

I have carried the torah.

I have caught a bluefish.

I have an enormous scar.

I have been hypnotized.

I have had a magpie pull a mitten out of my hand.

I have long been fascinated with diaries–particularly unconventional ones. Marking time creatively intrigues me. So when I discovered my brother Daniel Sagan was drawing imaginary buildings on an ongoing basis I asked immediately to see them. I’ve learned a lot over the years from him, as he is an architect, professor, and builder. We’re also obviously related–I dream recurringly of a house on stilts. Enjoy!

Musician’s play scales and etudes. Poets make haiku and quatrains. Architects don’t often get to focus on small explorations that are self-contained.  One of the conventions we use to describe buildings is the elevation drawing, an orthogonal representation of heights and widths and sizes of windows etc. Often it is more of a service drawing and a way to study a design in process.  To make an elevation drawing first, before the plan, before the building has been designed is not typical. I find however that drawing elevations of buildings that don’t exist is a form of practice. There is no program, no volume, no real specified size or scale. This frees me up to find ideas that often aren’t found during a more structured design process. This is how I talk to myself about design.

Similar imagery keeps occurring: houses on stilts, the hermit’s hut updated for the post Katrina world. The buildings are caught between rustic and high tech. My love of industrial buildings, the landscapes of northern New Jersey and the photography of Berndt and Hilla Becher are all influences on these drawings. I am also influenced by the work of my colleagues Arthur Schaller and Matthew Lutz. 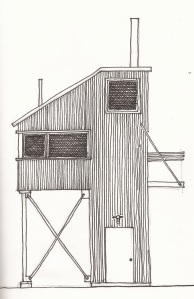 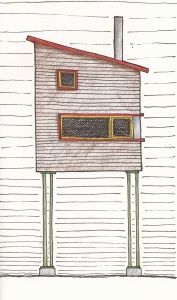 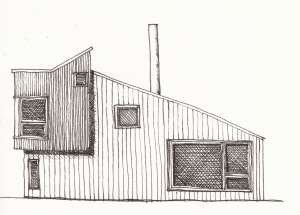 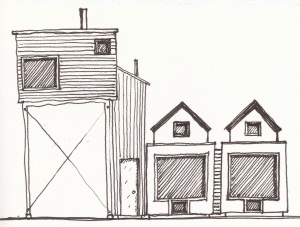 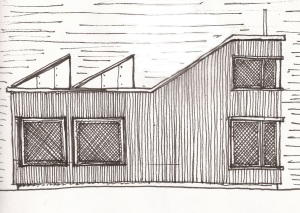 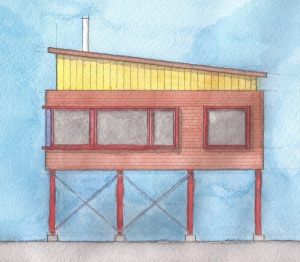 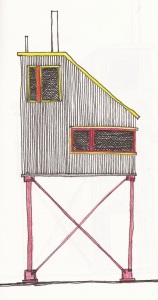 In the spirit of alternative memoirs … I want to introduce the work of Kristin Plucar. Graduate of the MFA program at Idaho State University, Kristin works as the Arts/Industry Coordinator for the Kohler Arts Center in Sheboygan, Wisconsin.  We met many years ago at an artist residency on an organic farm in Wisconsin.  Kristin was the artist liaison and my husband and I were residents.  Each morning we all gathered down in the gardens to plant, weed, and harvest vegetables and in the afternoons we took off to separate corners of the farm to work on our art.

Kristin works in a number of media including clay, drawing, painting, textiles, and multi-media work.  Over the summer I started seeing her “Daily Dog” drawings appearing on Facebook.  Every day there was a new drawing of her dog Kaia sleeping.  Not only did I love seeing Kristin’s work, but over time it felt like these images were a record, a memoir.  I thought these would be perfect to share on Miriam’s Well.

Amongst the images I am including some of Kristin’s thoughts on the pieces. 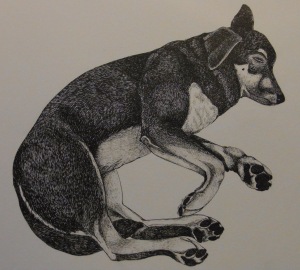 I started them as a way for me to do figure studies because that is not my strength, and I wanted something I could accomplish on a regular basis, because my job keeps me fairly busy and I am often pretty exhausted at the end of the day without a lot of creative energy. 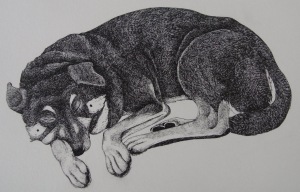 Our dog Kaia is a ready model, and for the most part a good one, since when she is not out for a walk, eating, or trying to play in the house she is sleeping. 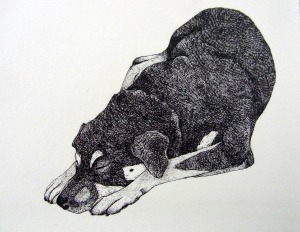 They are also a good way for me to emphasize my mark-making. For some reason I got hooked on this repetitive hatching technique…it’s a little stiff and maybe doesn’t have enough variety, but I do it and I wanted to do drawings that focus on that technique…having a shorthaired breed works pretty well for that.

On a more emotional level, this is a way for me to “know” my other, or connect with my other. I’m a dog person, and its kind of weird living alongside another warm-blooded mammal with a whole different set of needs and thinking process. I’m so curious about her and what she thinks of this life, and how Dan and I fit into it. If I were able to lose myself in my dog’s dream, I think I might understand her more… 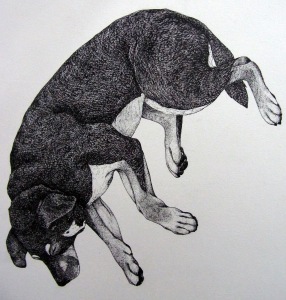 One of my flights of fancy is that maybe I am in my dog’s dream now, that this life is all part of the dog’s dream and it’s her spirit that keeps me alive…daydreams on a rainy day…

What if you still had your diaries from the 1960’s and 70’s? And actually posted them on the internet? What would that look like, feel like?
I’ve loved Richard Grayson’s work from the time I first read his quirky and hilarious short stories when we were both starting out as writers. Grayson is also an incredible diarist. He has kept a diary without missing a day for 45 years.
Here are some samples:

Tuesday, September 24, 1974
At dinner tonight, Dad asked me, “How are you doing?” He knew how depressed I’d been on Saturday about not seeing Mrs. Ehrlich anymore. My answer was “Fine,” and that’s pretty much the story at the end of the first therapy-less week of my life.

Watch the whole thing unfold as it is unpacked at ridetheflyingcarpet.blogspot.com 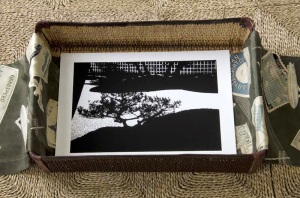 The Diurnal Diary piece looked great hung in the pop-up show, but is illegible as it is in my handwriting. So I did a fast and dirty one typed and hung it on a laundry line in a little glen as an outdoor version. 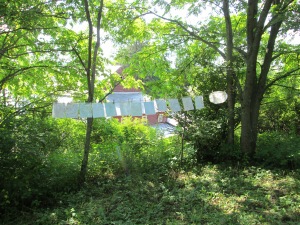 Got some interesting suggestions:

taking the paper out of plastic envelopes—this makes sense, although sometimes people encourage me to preserve the sheets—I’m really unsure

hanging the pieces scattered (of course, have done that on pathways in La Cienega wetlands) 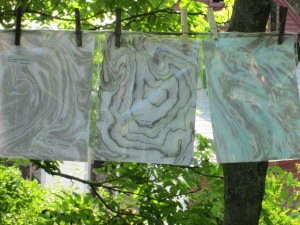 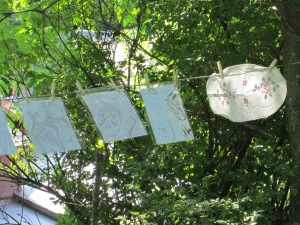 Check out the photos in the post below. Here was the process.
1. I kept a one line a day journal for a year. The process started on Valentine’s Day, 2013.
2. Went back and picked one entry per month that seemed representative.
3. Bought a windbreaker and had a local commercial embroidery business put the text on it. I had to fight with them a little to get one entry on the sleeve. I actually wanted the text scattered more, but this was an experiment.

sugar ants in the cat food

snipping mint in the rain

***
They sort of read like one-line haiku here. I still wish some were embroidered upsidedown.
Any suggestions for if I do this again? 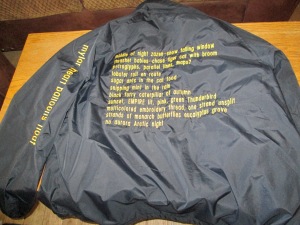 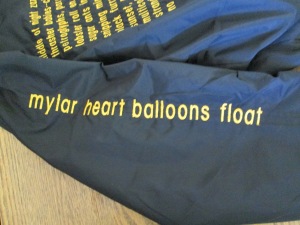 Enjoy! I will be posting full text and explanation next.

I’m not alone, I’m sure, in saying that reading the diaries of Anais Nin was my first foray into reading literary confessional work. I was probably 18 years old. Nin seemed so…exotic, sexy, dreamy. It wasn’t feminist but somehow female. I loved the diaries, but as I grew up they became like patcholi oil–a thing of the past.
Then the unexpurgated version was published. This was the diary in which Nin confessed to her affair with her father, an affair that began when she was an adult. This wasn’t her lyrical surreal prose in “House of Incest” but a real event. But was it real in terms I could understand?
I remember practically grabbing the hardback out of Julia Goldberg’s hands and imploring her to lend it to me when she was done. She did. I read every word, but with much less pleasure, in a way less belief, than in the first version. Which was “true?” One had emotions that had moved me, while lying through omission. The second was factually honest, but I found myself baffled. I couldn’t understand what drove her, the feeling.
Was it that I was too old to fall in love with Anais Nin? Too disturbed by something which smacked of abuse? Or was it that the truth was less true than the illusion?