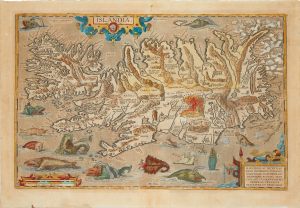 And it is for sale!https://www.atlasobscura.com/articles/islandia-map-sea-monsters

A beautiful show of her work at the Harwood in Taos. I feel particularly close to this art as it was done in Iceland, at Gulkistan Residency. 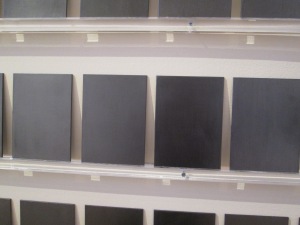 Here is my poem for the artist:

Light is no rorschach
rather, a palindrome

can be read equally
forward and backward

If I were a child at the edge of a glacier
I might, crepuscular,

appear as an old woman
yet still

retain the bones of a girl
who can leap, or roll

from dawn to dusk
or dusk to dawn.

Lava cools from fire
to the darkest earth

slow moving, it might just
be a necklace of fireflies.

On the island’s tectonic plate
if you squeeze the volcano

it becomes a handful of dirt
and in this way

I traveled a long way
to sit and knit in bed
beneath a white comforter.

raindrops on the window
obscured the red corrugated roof
the dark blue facade
trimmed in burgundy.

dreamlike, we were almost alone
except for the bossy attendant
and a lifeguard
giving a small boy
a swimming lesson.

on the roof, a violent wind–
hot water rushing
down the staircase
warmed our feet
and a man with a hairy back
soaked in a hot pot Celsius.

the knitting yarn was gayly
green and orange
not from Icelandic sheep–
let’s be honest–
but from Hobby Lobby
at home.

each stitch made meaning
out of the whitecaps on the harbor,
showed how the sea
makes a pass at the land
like a too bold
pick-up in a bar.

you were still sleeping
in a nap
that trailed all the way
from North America.
I traveled a long way
to have you look
like a child again
and ask me for an apple.

Here’s the link to Amazon Kindle for SWIMMING TO REYKJAVIK http://www.amazon.com/Swimming-Reykjavik-Miriam-Sagan-ebook/dp/B00JQNGP60/ref=sr_1_1?s=digital-text&ie=UTF8&qid=1397749162&sr=1-1&keywords=miriam+sagan

Poet Miriam Sagan and artist Isabel Winson-Sagan went to Iceland to experience the Arctic night near winter solstice in early 2014. They shared experiences such as searching for the northern lights and swimming in thermal pools, and responded in words and images. These photographs and poems were produced during the trip, and edited and shared later. Together, they express an elemental experience where such forces as celestial bodies, light and darkness, weather, and the points of the compass are embodied.
It is not that usual for a mother and daughter to collaborate, but our experience has deepened our understanding of both place and of each other–two women of different generations and sensibilities. From SIM guest house for international artists to the Hotel Fron to the sky viewing pavilion of the Northern Lights Inn–Iceland proved not only hospitable but inspirational.

Here’s the link to Amazon Kindle for SWIMMING TO REYKJAVIK http://www.amazon.com/Swimming-Reykjavik-Miriam-Sagan-ebook/dp/B00JQNGP60/ref=sr_1_1?s=digital-text&ie=UTF8&qid=1397749162&sr=1-1&keywords=miriam+sagan

Poems in which I knit and Isabel naps, photos of volcanoes and laundry, darkness is our creative womb and where are the northern lights?

The e-book is also FREE at free at https://www.smashwords.com/books/view/429698


Rush hour, complete darkness–
transatlantic flight to Keflavik–
jet-lagged in a high cold wind
I grab a taxi, discuss
destination, time, a price in krona
I pretend to convert in my head.

The driver asks me
Well, what Icelandic sagas have you been reading?
Oh, I say, pleased with myself
to have an answer
“Saga of the Greenlanders” and “Eric The Red.”

But I have not impressed the man
and he is disappointed,
“You should really read Laxdaela about Gudrun,
Women are just minor characters in Greenlanders.”

“But the woman Far-Voyager
there went to Newfoundland,
became an anchorite, met the pope…”

“In Italy,” he agrees, “a very long journey
in those days,” then reiterates
“You should read Laxdaela.”

Towards the city,
high rise offices
lit-up cubicles full of those
who drink coffee and concentrate
over luminous screen,
words that appear and then are gone–
and he drops me
half a block
from Hotel Fron.

Here I am, earlier this winter, at Keflavik airport in Iceland.

Isabel took this shot.
Reykjavik is a Unesco City of Literature, and not just because there are poems on the airport walls. 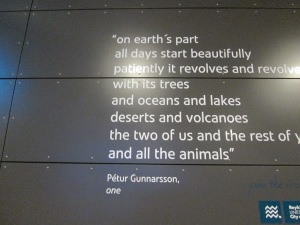 my 24 year old daughter
who spent her childhood
squeezing through a cat door
and ruining a window screen
letting boys in and out
immediately climbs to the sill
unlocks the pane, and departs.

I, on the other hand, larger, more frightened
sit, one leg in the house, one in the yard
squeeze my hiking boot
through gingerly
land on a cellar door.

the administrator of the guest house
is displeased with us
gives us a strict Icelandic lesson
in locking and unlocking
blames the weather–of course–
for the swollen jamb
and us for our incompetence
but with grudging admiration
for our initiative.

as for me, I’ve been re-born
onto a windy street by a windy bay
where everything seems content
to knock me over
and the sun
sits on the horizon
patient and intent
as a midwife.

A glorious Santa Fe day, and even though it is the end of the semester with lots of grading due I decided to take Saturday and enjoy my urban/suburban life here on the Westside.
Even laundry and dry cleaning give satisfaction, but the best was a visit to the nursery. A Moorish garden by definition is walled, and has big blue pots, and roses, as well as an evergreen. I had everything but the last. Now have a dwarf spruce in one of those pots.
Popped in to Lannan Foundation to see the show AGAIN: Repetition, Obsession and Meditation. Agnes Martin grids, and more of the like. Never ceases to intrigue me–visual artists seem to not be afraid of repeating themselves, while writers are. Both have obsessions, but as a poet I tend to try and prune out redundancies–but why?
Here is a piece I love by Danish-Icelandic artist Olafur Eliasson–lighthouses in Iceland, I believe. I wonder if I’ll get to go back–I’m scheming too. Something I long to repeat. 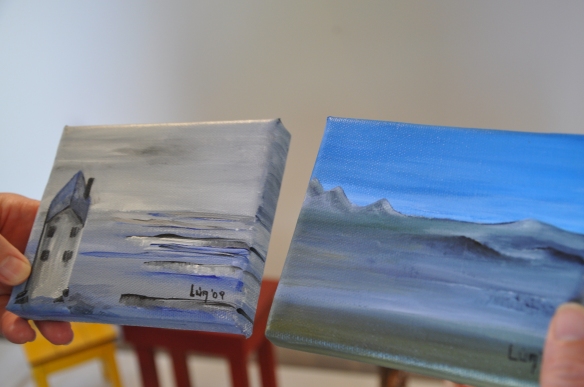 In Laugervatn there was a little art gallery, where we asked directions our first day. On the last day I went back and bought two tiny paintings of Iceland as souvenirs. The mountain is a classic shape, seen in nature and on canvas. The house looks just like the ones in fishing villages.

1. Waffles. Thin delicious ones with heart shaped segments. Served with a berry jam and a not too sweet clotted cream. Served with the phrase that is the highest praise–“very Icelandic!”

2. Whenever we try to pronounce a word, Icelanders make spitting and tsk-ing sounds and start pointing to various parts of their mouths, tongues, and palates–the parts we are using improperly.

3. Most Icelandic words have the emphasis on the first syllable (this has been helpful to know).

4. Pokemon. On graduation from a secondary school level, the entire class dresses in identical costumes made of felt-like fabric in bright synthetics and stays up all night to party. Characters include cultural icons like the Cat in the Hat or Pokemon–the group photos are adorable.

5. Heat blasts–the windows are open. Energy is totally renewable. Unfortunately, I could get used to this.

6. Blue lupine, imported from Alaska for erosion control, has in the nature of such invasive species totally taken over. Beautiful–if hated.

9. Butter. Everywhere. And a good thing.

10.What is the ideal Icelandic boyfriend or man?
Answer: It used to be a banker! But really an intellectual is best. Intelligent.

11. No meat is imported to Iceland. But there are hamburgers everywhere. No one knows why. Hot dogs are a national favorite but sold from kiosks. When asked about the ubiquitous hamburger, people just sigh.

12. Icelanders don’t always like to answers letters, e-mails, or messages. It doesn’t mean they don’t like you, just that they are procrastinating.

13. It seems the reason the sheep run away from me is that I coo at them in English. If someone speaks Icelandic to them, they look alert and pleased.

We drove to Vik–the southernmost town in Iceland. Started off going a bit east and then south through the agricultural heart of the country–and was interested to finally see some greenhouses with lights–which would seem a natural here in terms of lots of electricity but limited times of daylight.
Admired funny little lines of birdhouses right on the ground and sheds with turf roofs. Suddenly, a group of wild swans took flight. To me, it was like something out of a Russian fairy tale.
We then drove through the towns of Hella and Hvolsvollur and saw many signs of the volcanic activity from Eyjafjallajökull that paralyzed European travel. Gigantic fields of volcanic ash are still blowing over the highway (despite removal equipment) and perhaps most impressive, the little one could see of the gigantic glacier beneath cloud cover was streaked in black. The glacier’s name is Myrdalsjokull. Interestingly, it is an older volcano, Katla, that has traditionally devastated the area. It is currently asleep.
Vik is wild–high pounding surf, some of the biggest waves I’ve ever seen, made more dramatic by the fact that they look glassy black because of the black sand beach. Rock formations in mist (I got a slightly garbled tale from German tourists–either these were trolls turned to stone or trolls turned people and boats to stone) and sheer cliffs full of nesting Arctic turns, black-headed gulls, and other kinds of gulls. Saw red-marked oyster catchers.
The town is lonely, dominated by a red church on a hill. So windy things blew out of the car I carelessly left open for a moment. Hot mushroom soup. We looked for puffins, but the charming punk girl at the information desk told us they really weren’t there, (but nesting in a different area) and fish all day anyway. Then she did series of imitations of a puffin–sticking out her chest, flapping her wings, settling into her nest.
On the way home the car started to overheat, and we had various adventures with mechanics in the medium sized village of Selfoss. Crowded for the first time so far in Iceland–a Friday afternoon at the start of summer season. We did see a series of spectacular waterfalls, one up close, many from a distance. And a rainbow with one foot touching a hillock on our return.