Along the Lines of Displacement: A Tropical Food Forest. Palms from zones 8 and 9 transplanted to zones 5 and 6 (Storm King, NY). By Mary Mattingly. 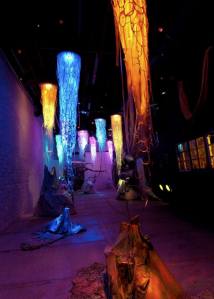 It looks like I have found someone to embroider these garments with text. The working draft is below. Your thoughts?

I said, more
than once:
never
get in a car
with boys 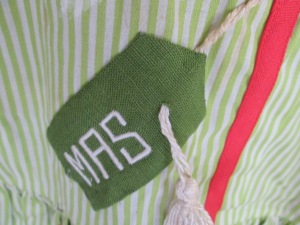 I wanted to add a bit of comment to the poem below, obviously inspired by Moses.
“You’re not Grandma Moses,” an artist friend said recently, meaning I wasn’t going to turn into a visual artist in my sixth decade. This was in relation to my text installation off-the-page work. I had to agree–I was going to continue to need collaborators or a very well thought out design to continue to make these pieces.
Or maybe not. Maybe I can actually teach myself enough to function as an outsider artist.
“I’m not Grandma Moses,” I told an assembled group at Salem Art Works this summer, giving a process talk. But then a young man reminded me that we were indeed in Moses’s neighborhood of upstate New York. And I remembered how I’d loved her work as a child. How she is a great American woman painter. A folk artist, or outsider, or maybe not. And she started with needlework and textile.
So the poem was an exploration of how she was “self taught.” And that is something I can indeed aspire to.

There is no particular need for me to start a new project, I’m busy and don’t have a venue. But I do have an idea, and materials. I was at a fantastic second hand textile and quilting store in Leadville, Colorado and bought a bagful of things. I also have a dress of mine from childhood. My overall image is of a clothesline piece with seven garments or hangings on it, with some hand embroidery and some commercial (or machine, but I need to find someone who can do that).

Questions:
1. Will it be emotionally satisfying or creepy to finish a piece someone else left undone?

2. Do I dry clean pieces AFTER I finish the embroidery? If so, does this destroy the ink pattern? 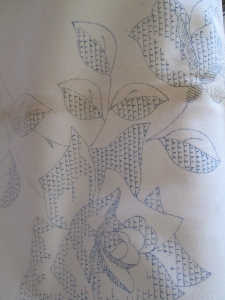 3. The piece is partially about my synesthesia, my lifelong ongoing hallucination of the days of the week as colors and as actual people. There are seven pieces. Does each need to be a day of the week? 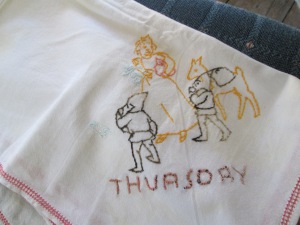 4. Is there another word for “weekly”?

I love the hole in this hanky!

5. Does anyone know how to do machine embroidery? 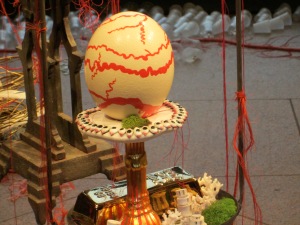 Robert Rauschenberg created 1/4 mile of art in a gallery space, using his incredible assemblages, montages, and screens. You can see it in the documentary film “Man at Work.”
Book artist Patricia Pearce, Santa Fe Community’s College own force of nature, is curating our very own 1/4 mile, which will run into the west wing.
Here are some pieces–not yet formally placed–from one of her classes. The poetry class is also participating, with a concrete poem from each student.

Stay tuned for reception details. Installation will be complete after spring break! 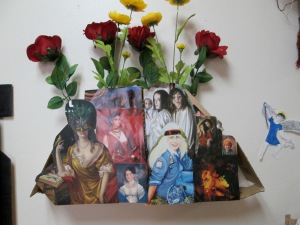 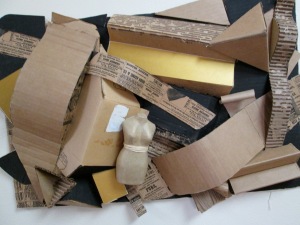