I live on the 600 block of Kathryn Street, in a house I bought 35 years ago. “What is this neighborhood?” I asked the realtor as she drove west, out of the center of town and into an increasingly funky and unfamiliar place.
“A neighborhood you can afford,” she said.
I walked up the steps of the adobe stucco house, and looking through the living room window, had a full blown hallucination. I saw what was obviously a funeral, in full swing.
I better buy this house,I thought. I’m meant to live here my whole life and be buried from it.

For years I used to say, “I want to buy an empty lot on Agua Fria.” Agua Fria is the central street of the neighborhood, running east/west, all the way down to the old Spanish village of the same name. I didn’t know why, but I wanted another piece of land. Agua Fria has murals of the Virgin of Guadalupe, and a kind of folly in someone’s front yard. Cement statues and fountains of all kinds fill the space. It has American flags, madonnas, pixies, flowerpots, naked ladies, flamingoes, swans, and cupids. There is also Santa Claus, St. Francis, a dog, a frog, a windmill, angels, and chimes. The sign reads: “The love of this garden reflects the love of Helen’s Beauty.’”At first I assumed this was about Helen of Troy. Then some told me it was the gardener’s wife who had died. At all seasons it is strung with lights.

The police shot our neighbor, decades ago, on Hickox Street by the corner of St. Anne’s Church. He was mentally ill, and distraught, threatening to cut himself with a small steak knife. At the end of a long shift on a holiday weekend, a cop shot and killed him. The bullets penetrated the wall of the house a friend of mine was renting. The bullets narrowly missed the bunk beds where the red-headed boys were sleeping. I showed up in shock the next morning around 6 am to check on them and found my friend drinking vodka. I drank a shot myself. A decansos, a memorial, for the deceased sprang up, focused on the stop sign at the corer. Flowers and wreaths and notecards adorned the place where he departed this world. The cop was put on leave, my friend moved and later died, and I lost track of everyone else. Maybe I’m the only one who remembers?

The house is just a year or two younger than I am. My neighbor to the north, Gilbert, remembers when he was a toddler and fell into the foundation of what would be my house. It had been raining, and there was standing water. Mrs. Lucero, the across the street neighbor, dashed to pull him out. Gilbert and I are the same age. The house will soon be 70.

***
It was not my funeral that I saw. It was my first husband’s. He, Robert, died as a young man, after surgery. The house was full of people for many days. After he died, a few months later, the forests began to burn. I remember that because he would have been fascinated by the fires, as he knew a lot about the natural world. But he wasn’t there to discuss it with. The Jemez Mountains to the west were volcanic. Now fire covered them, but not a fire that had come from within. The sun turned red at noon Ash started falling on my planters full of pansies. My neighbor, the one whose house was shot up, called and said: “Mir, do you have a valium?” I lied, and said I didn’t.

When my mother died, I inherited a share in a piece of property that was contentiously owned by a family group. When it sold, the money confused me. It felt bitter, somehow tainted. Then I realize I could buy an empty lot. And turn it into…a poetry garden with sculpture. I looked all over town. I found an amazing—if scary and overgrown—piece of land that housed a section of the Acequia Madre. That is the central irrigation ditch that runs through town. No one owns it, not the city, not individuals. It is a kid of commons. After many phone calls, I tracked down the elderly man who was the mayor domo in charge of the ditch.”I know that piece of land,” he said. “Don’t buy it. It is cursed. It is good for no one.”

I bought a different piece of land, one between Agua Fria and the river. Soon after, the entire neighborhood flooded in a hundred years’ storm. For a few years, it was a blank space. There was an abandoned building next to it, and a view of the mountains and the big sky. It was a suburban space, but one that touched on the wild. There was a homeless camp. Boundary lines were unclear. Raccoons, skunks, rabbits, and coyotes crossed it. Of course so did the neighborhood’s raucous crows. Robert Smithson, the father of land art, calls such places the “slurb,” the intersection between the suburban and the wild. Or, between what I call home and the rest of the cosmos.

Fire and water. The dead and the living. Earth and air. I did not even need to invoke these muses. They were already present. Here.

***
Recently, I passed Gilbert in the street. He called me over to introduce me to another friend. “This is my neighbor, Miriam,” he said. “She’s lived here her whole life.” We both started to laugh. “Well,” I said, “the only part of my life worth living.” And we kept on laughing.

Another outsider artist discovered through Misfits.

I learn something new every time I visit the Misfits pages on Facebook. Outsider art, visionary art, self-taught, raw vision…there are a lot of interesting labels for art that isn’t easily categorized. Initially such art was considered “untrained” but even that is no longer a fixed thing. Anyway, I have loved outsider art for many years, and always want to know more.

Purvis Young with his early painting installation in Goodbread Alley that gained him notice in Miami.

Wikipedia says:
Purvis Young (February 4, 1943 – April 20, 2010) was an American artist from the Overtown neighborhood of Miami, Florida. Young’s work, often a blend of collage and painting, utilizes found objects and the experience of African Americans in the south. Young gained recognition as a cult contemporary artist. In 2006 a feature documentary titled Purvis of Overtown was produced about his life and work. His work is found in the collections of the American Folk Art Museum, the Corcoran Gallery of Art, the High Museum of Art, the National Museum of African American History and Culture, the Philadelphia Museum of Art, and others. In 2018, he was inducted into the Florida Artists Hall of Fame.

Built during the Depression by an unemployed–and later terminally ill–outsider artist. These kinds of roadside grottoes–so personal and yet also religious and patriotic–seem to draw from a wellspring of imagery. Why Noah’s ark? Why stone? Why the obsession? I’ll always care, and go out of my way to see these pieces.

Rich and I were at Noah Purifoy Desert Outdoor Museum (http://www.noahpurifoy.com/joshua-tree-outdoor-museum) 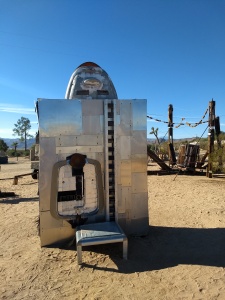 It has an apocalyptic feel. I asked Rich for some words to describe it. He said:

which I thought made a lot of sense!

Born in Snow Hill, Alabama in 1917, Noah Purifoy lived and worked most of his life in Los Angeles and Joshua Tree, California, where he died in 2004. He received an undergraduate degree from Alabama State Teachers College in 1943 and a graduate degree from Atlanta University in 1948. In 1956, just shy of his 40th birthday, Purifoy earned a BFA degree from Chouinard, now CalArts.

His earliest body of sculpture, constructed out of charred debris from the 1965 Watts rebellion, was the basis for 66 Signs of Neon, the landmark 1966 group exhibition on the Watts riots that traveled throughout the country. As a founding director of the Watts Towers Art Center, Purifoy knew the community intimately. His 66 Signs of Neon, in line with the postwar period’s fascination with the street and its objects, constituted a Duchampian approach to the fire-molded alleys of Watts. This strategy profoundly impacted artists such as David Hammons, John Outterbridge and Senga Nengudi. For the 20 years that followed the rebellion, Purifoy dedicated himself to the found object, and to using art as a tool for social change.

In the late 1980s, after 11 years of public policy work for the California Arts Council, where Purifoy initiated programs such as Artists in Social Institutions, which brought art into the state prison system, Purifoy moved his practice out to the Mojave desert. He lived for the last 15 years of his life creating ten acres full of large-scale sculpture on the desert floor. Constructed entirely from junked materials, this otherworldly environment is one of California’s great art historical wonders.

Here is a piece of his we saw in the Palm Springs Art Museum.
Photo by Rich Feldman.

Yesterday we visited his outdoor museum in Joshua Tree. Had seen it ten years ago. It remains an inspiration–a very challenging one but a true source of vision and the ability to perceive.
I hope to have more to say about this anon!

In an ordinary neighborhood in Palm Springs…photos by my travel guide Richard Feldman, who is in himself an Atlas Obscura. 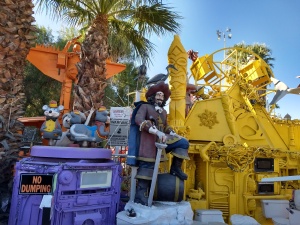 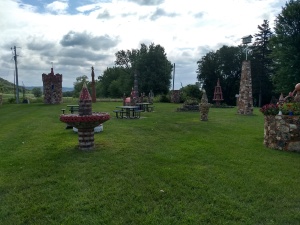 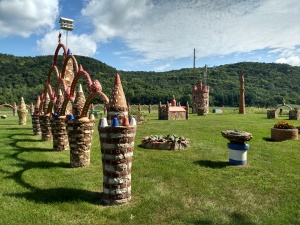 Passed this was with Hope Atterbury of Cliff River Springs and visiting friend Devon Miller-Duggan on the way to a nice lunch in Abiquiu.
Does anyone know anything about this cool piece of outsider art? 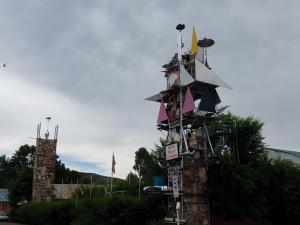 This might be the most amazing piece of outsider or visionary art I’ve ever seen. The Bottle Houses by Edouard Arsenault are on Prince Edward Island. They include:
The Chapel
The Tavern
The House

And speak to the creator’s Acadian roots. Not only are they an individual vision, but a communal one. 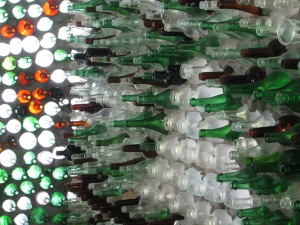