Of all the artists I know, Roshan Houshmand is the only one whose paintings are both in my house and in my office on campus.

As an Iranian/American painter who was raised in the Philippines and then Iran, with a Dutch-American mother and a Persian father, my roots are steeped in ancient patterns and textures.  My formal education in the arts however is absolutely Western, with a BA from Bennington College and a MA and MFA from Rosary Graduate School of Fine Arts in Florence, Italy.

My life’s journey has been based on making art for the past thirty years. It has been the only constant in my life for as long as I can remember.  My process feels ritualistic, and I am often guided by intuition, and a sensitivity to the formal relationships in paint.

The most recent series “Petrichor” incorporates Persian calligraphy, block prints, collage and painting. Petrichor refers to the distinctive aroma released when rain falls on dry land, activating certain compounds in the soil.  These paintings are about the present.  They were achieved with a spontaneity guided by process using mixed media.  The immediacy allows for a certain specificity and clarity that inthe past has been diffused through a more formal and analytical approach to image making.

I wanted to add a bit of comment to the poem below, obviously inspired by Moses.
“You’re not Grandma Moses,” an artist friend said recently, meaning I wasn’t going to turn into a visual artist in my sixth decade. This was in relation to my text installation off-the-page work. I had to agree–I was going to continue to need collaborators or a very well thought out design to continue to make these pieces.
Or maybe not. Maybe I can actually teach myself enough to function as an outsider artist.
“I’m not Grandma Moses,” I told an assembled group at Salem Art Works this summer, giving a process talk. But then a young man reminded me that we were indeed in Moses’s neighborhood of upstate New York. And I remembered how I’d loved her work as a child. How she is a great American woman painter. A folk artist, or outsider, or maybe not. And she started with needlework and textile.
So the poem was an exploration of how she was “self taught.” And that is something I can indeed aspire to. 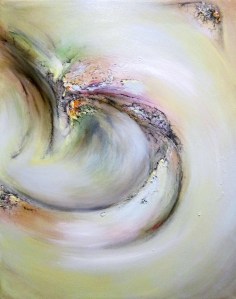 Don’t Shoot the Messenger- The Maelstrom Project
By Doug Bootes
I stand over the Rio Grande rift, feeling my legs being incrementally pulled apart with the continent, paintings on one side, words on the other, me in between, disappearing into both.
Poems, paintings. I began with a concept, maelstrom, a general reference to the undertow created by the insidious disparity of wealth and power in our free society and its devastating consumption of millions of lives, of generation after generation. Not an easy topic, not a well-articulated idea even. No, I didn’t want to respond to myself with a poem interpreting what’s depicted on canvas. No, I didn’t want to paste, paint, scribble or scratch words onto the canvas, no more than I want to decorate the words on the page in illuminated text or illustrate the stanzas.
So for three months I painted and wrote, separate, but parallel in context; whatever came to mind when I repeated the word, maelstrom. Liberated from the confines of form, the project took on a life of its own, a space where I can breathe deep and reach out in all directions, a space I can’t possibly fill.
Ten paintings and twenty poems. A collection of thoughts arranged around the idea that true beauty and character thrives in the vast southern underbelly of America stretching from Florida to California along interstates, on street corners, in alleys, in human beings pushed to the curb of consciousness, the people behind the card board signs with complex stories and lives that led them to the periphery of our vision.
Upon closer investigation, their environmental and socio-political backdrops are equally layered with neglect and ignorance of undiagnosed ills, decay and abuse. In words and paint I depict despair in the context of the freedom that comes from survival, from overcoming, from the liberating knowledge that we all bear the same light within us, no matter how deeply hidden. Chaos juxtaposed with transcendence; to only depict one or the other is incomplete, perhaps even irresponsible.
In the beginning, an exploration of society ills, in the end, an exploration of my own pale reflection.
In days when publicly funded police gun down the mentally ill and addicted as preferential treatment, when politicians speak endlessly of change which only occurs in their pockets and bank accounts, its time to realize that if we continue ignoring the problems staring us in the face begging for change, if we don’t join them in the streets to challenge the status quo, we doom all of our children to dwell in their chaos.

See, feel, contemplate. What I’ve ended up with are ten paintings and twenty poems encompassing humor, tenacity and resourcefulness.

Conceived on the winter solstice of 2013, the first installment of the Maelstrom project includes ten paintings and twenty poems interfacing each other. The ten paintings were done in a progressive succession of twenty six steps, each step photographed after its completion. The resulting two hundred and sixty images were then combined with thirty five detail images to compile a slide show documenting the process from the first scratch of charcoal on the canvasses to the last wash.
The twenty one minute slide show will be projected onto a screen during the reading of the poems, first forward, then backward after a brief intermission. A chapbook of the poems and images of the paintings will be released during a reception in Santa Fe prior to the opening of the show in New York featuring several of the original paintings.