And not drive into Colorado–but we are being law abiding! 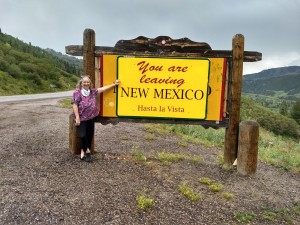 Two of the most famous descriptions of human responses to the ”plague” (aka the “Black Death”), arguably the most devastating of all forms of epidemic, are literary. A celebrated depiction of the Great Plague of London of 1665 was published in 1722 by Daniel Defoe; although fictional, it seemed eerily accurate, then and now. The other was composed by an eyewitness of the outbreak of plague in Florence in 1348, Giovanni Boccaccio, in his Decameron. The long introduction (c. 25 pages) not only describes in detail the onset of this seemingly unprecedented catastrophe and its death-toll (30+%), but also the range of responses to it. Although Boccaccio acknowledges that some people (both clerical and lay) came forth to help their friends and neighbors, the picture he paints is otherwise unrelentingly gloomy, in which the plague brought out the worst in most people, especially their selfishness and greed. This prologue provides the setting for the book, the telling of one-hundred amusing and often bawdy stories by ten young rich Florentines, who wait out the course of the plague by progressing each day from one villa to another outside the city, passing the time in storytelling while the poorer urban population is decimated. Significantly, Boccaccio does not provide a full picture of European reactions to the plague, for in much of northern Europe there occurred widespread scapegoating and slaughters of the Jews, blamed for introducing and spreading this novel disease, the culmination of 250 years of vilification of the Jews from the First Crusade onward, resulting in their killing, pillaging, mulcting, and expulsion. Little of this happened in Italy, and so Boccaccio says nothing about it. He is, however, typical of chroniclers and historians across the ages in strongly emphasizing mostly negative human reactions to epidemics, even if there are few patterns across the board. The blaming of the Jews for the plague in the 14th century occurred in much, but not all, of Europe, and in fact is somewhat unusual in the annals of epidemics. Thus, the Jews weren’t blamed for the influenza of 1918-19, but they most certainly were for Germany’s defeat in WWI, which led to their systematic extermination in the Holocaust a few decades later.
Fear of the unknown profoundly derails people, individually and collectively, and easily leads to anger and a wish to vent. Epidemics can and do prompt these and other forms of bad, sometimes even evil behavior, as well as self-absorption and greed (time to review the list of seven deadly sins!). But in this history there are no clear patterns, much less repetition, and this is hardly the full picture in any event. Nevertheless, in presenting the ‘news’ of today and of yesterday, we tend altogether too readily to emphasize the negative. It is this tendency among historians that recently prompted Samuel K. Cohn, Jr, a distinguished historian of the plague in late medieval and early modern Europe, to publish a riposte to all this negativity in his Epidemics: Hate and Compassion from the Plague of Athens to AIDS (Oxford, 2018), in which he argues that human beings have also responded with great compassion and selflessness to such catastrophes across the ages, along with scapegoating of Jews in the 14th century and of gays and drug-users during the outbreak of AIDS in the 1980s. In the present crisis, while there is plenty of stupid behavior (with potentially ghastly consequences), it is worth stressing is that, perhaps more than ever, we see again and again people reacting compassionately at many levels. Why? Partly because, a century after 1918-19, we have a vastly superior array of knowledge and weapons with which to fight such epidemics (as discussed in the first blog) and allay our primal fears; but it is also partly because of the internet itself, which instantaneously communicates across the world not only epidemiological knowledge, but also awareness of great, loving responses of fellow human beings, which impels others to compassionate action as well. In short, knowledge of divers sorts is helping us live up to the better angels of our human nature in this present crisis, even if many of us in the end neglect our knowing and choose to behave badly anyway. (The following useful maxim has recently been offered online: Imagine that you might be carrying this virus, and behave accordingly toward everyone else.)
P.S. Speaking of good behavior, Oxford University Press, publisher of Sam Cohn’s book, has this week been prevailed upon to slash the price of his book from around $140 to $30. Get it while there are still copies!

Now that the WHO has declared the coronavirus to be a worldwide epidemic, we can perhaps understand it better by juxtaposing it to something comparable in the past, not necessarily a recent one (like SARS in 2002-04 or ‘swine’ flu in 2009), but an epidemic farther back both similar and different in revealing ways. I would suggest comparison with what has been called the Great Influenza of 1918-19, precisely a century ago. A great deal of what we know (or, more precisely, think we know) about this catastrophe can be found online in an article on Wikipedia. Yes, I said Wikipedia and online, which many teachers and professors cavalierly dismiss out of hand. The fact is that using these resources, nearly everyone has instantaneous access to almost all of human knowledge. The present excellent article in Wikipedia is misleadingly entitled “Spanish flu,” a rubric that is being openly debated and will probably be soon replaced by something like “1918 influenza pandemic” (a debate that takes years to resolve in print media). In the space of about two years (some place the beginning in 1917, the end in 1920), a particularly virulent form of influenza spread throughout the world, killing at least 20 million people, more probably something like 50 million, and (a few say) possibly 100 million. More tellingly, it seems to have infected at least 500 million people out of an estimated world population of 1.8-1.9 billion. If we accept the reasonable estimate of 50 million dead, that would make a morbidity rate of around 27% (those sickened) and a mortality rate of 2.7% (those killed). These are interesting disparities, especially if one accepts a current view that the 1918-19 and present influenzas are variations on H1N1. But even if they’re not, such figures invite comparison. Although it’s early days yet with the corona virus (and no one knows how long this will go on), this morning I read on the very accurate John Hopkins website that about 285,000 people worldwide have been officially diagnosed with it thus far, 90,000 have recovered, and 12,000 have died. More specifically, in Massachusetts, of 410 diagnosed cases, one person has died, an 87-year-old man with many preexisting conditions.
What’s changed in the interim? A great deal, none of which is to be taken for granted. The idea of vaccination, for example, began with smallpox around 1800, took over a century to become a widespread practice, and smallpox was brought under worldwide control only in the 1970s. The virus causing the influenza of 1918 was identified only in the 1920s, an effective vaccine only in the 1930s. Vaccination against other diseases then became more and more common (e.g. polio in 1956, measles in 1963, chickenpox in the 1970s), but still arouses passionate opposition in some quarters. Penicillin was discovered around 1930, antibiotics from the 1940s onward, antivirals since the 1970s. We all too easily take for granted these and other great advances in science, medicine, and public health and policy like sanitation, clean water, and sterilization, which cumulatively led from an average lifespan in the US of around 47/48 a hundred years ago to around 78/79 today. We are also more recently the beneficiaries of inventions like computers and the internet, glorious inventions for the instantaneous dissemination of knowledge and truth (but also, as we have ruefully come to realize, fake news, previously known as lies, and a curiously widespread indifference to easily determinable facts). And what does this (hopefully) teach us? Change is inevitable, but progress is an option and never to be taken for granted. And even when there is progress, it’s usually three steps forward, two steps back.